Ever wonder if today’s gadget-mad, high tech world has built a brick cyber-wall between you, your boyfriend, your hubby or you and your kids? Salma Hayek, Maya Rudolph and Maria Bello play wives out to reconnect with those they love. It’s a wild Fourth of July family outing in the boonies for these Grown Ups!

SheKnows is up in the mountains above Malibu, California at the picturesque Malibou Lake Mountain Club to share an outdoorsy day with the stars of the new Adam Sandler comedy Grown Ups. We spoke with Salma Hayek, casual and gorgeous in a royal blue silk sleeveless shorts-romper by Balenciaga and a pewter, long braided necklace with tassel by Gucci, before she spied a snake during a TV interview and freaked! Ah, the great outdoors. 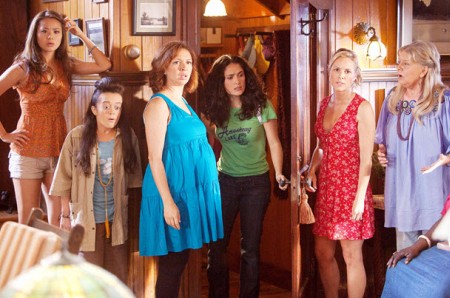 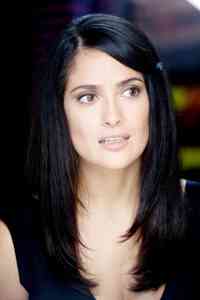 Grown Up moms have their moment

Maria Bello: Did you take that black dress from the movie?

Maria Bello: I loved that dress!

SheKnows: Hi ladies. Salma, this is the first movie where we’ve seen you credited with your married name Pinot. Why did you decide to do that and is it true that your daughter suggested it?

Salma Hayek: At the beginning of the film, she was very little and I was sitting there and my chair said Salma Hayek and she said, “What does it say there?” and I said, “Salma Hayek” and she said, “Where is Pinot?” because her last name is Pinot. In France, my husband is much more famous than me — everyone calls me Madame Pinot so she’s used to it and I realized that Valentina felt left out. I also have two children that I inherited from this marriage and in a way it helps bring the family together.

SheKnows: How did she react when she learned your credit was Pinot in this movie?

Salma Hayek: Oh, she thinks it’s the least I can do, trust me [laughs].

SheKnows: How are you balancing motherhood and your work? Did you bring her to the set for this? 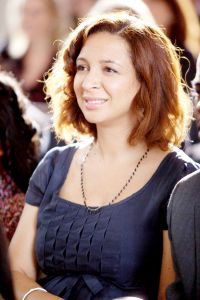 Salma Hayek: Oh we all did. We all have children and we all brought our children to the set. Adam [Sandler] makes it like the dream environment to bring children. They are so highly entertained. You’re nervous when you get back home (as to) how you’re going to entertain your child because they have all kinds of toys and things there for them to play with. Everybody had children around the same age so she loved coming to work every day with me.

SheKnows: For all the ladies, Salma’s character gives up attending her fashion show in Milan for the family weekend. Have you had to sacrifice work-related things for your family?
Maya Rudolph: I seem to be pregnant throughout all my movies so I don’t seem to give anything up, do I? [We laugh]. I’ve done SNL very pregnant. I think I had my first daughter nine days after I was on SNL which was kind of crazy because I had her in California so I had to fly back. But, nothing has really stopped me (from being with family) so far but it is a nice “out” if you don’t wanna go somewhere.

Salma Hayek: I seem to have to give a lot of things up. I don’t have a lot of time anymore so I know my friends have suffered from me trying to juggle everything. Like your social life can suffer a little bit. Definitely every parent will tell you that. I was, at one point in my life, very much involved with social causes and as passionate as I am about it, I remember it almost had to be a choice. I’m still involved but there is just so much you can do in 24 hours. 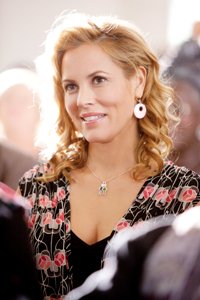 Maria Bello: I remember when Jackson, my boy, was five and I got home from a job and realized I had barely been there when he was in pre-school. He was with me a lot and he’d come to China and England and France, but in terms of me being there for his everyday school life, I wasn’t. So when he was five I decided to take some time off and just be there during the school year. That was the greatest thing I ever did. And now we do both. He comes with me all over the world but I’m home a lot of times, too.

SheKnows: And, Maria, we usually see you in dramatic roles, so what was it like doing the comedy in this?
Maria Bello: Oh God, I was terrified. I was really terrified. It’s the first time I ever did that sort of comedy but Adam and all the guys were so generous and so open from the first day. They were giving me different lines and ways to (say them). Especially David Spade, who kind of directed me the whole time, he would pull me aside and say, “Do it like this. Say it like this.” So, I learned so much doing it and I definitely feel more comfortable with it because of all these guys.

Up next…the gals talk the guys of Grown Ups!