Khloe Kardashian spares no expense when it comes to her NBA all-star husband, Lamar Odom. So what did the Kardashian sister reward her husband with for his Los Angeles Lakers championship victory? Here’s a hint — it has four wheels and boasts a $400,000 price tag.

Khloe Kardashian surprised Lamar Odom with a new Rolls Royce and her mom just couldn’t wait to gush about it. 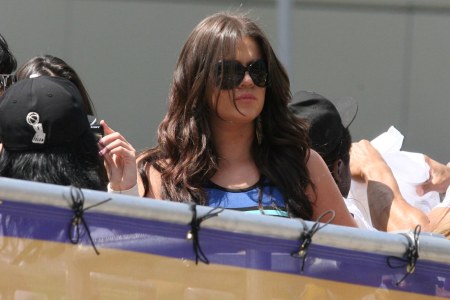 E! News reported Khloe Kardashian and Lamar Odom were seen taking the new addition out for a spin — Lamar Odom’s kids included. It was Father’s Day after all.

It’s nice to have something to celebrate after spending so much time dodging pregnancy rumors.

Khloe recently wrote on her website, “Cheering on my hubby from the stands and watching the Lakers win the NBA championship last night was one of the proudest moments of my life.”

If the Lakers repeat next year, Khloe Kardashian might have to get a new show to pay for her next splurge.