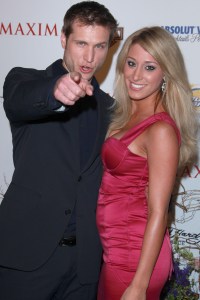 Reports are surfacing that The Bachelor’s Jake Pavelka, 32, and Vienna Girardi, 24, have split just months after the couple professed their love on national TV. I know, we’ve lost another reality show couple — it happens.

The couple’s rep told UsMagazine.com, “Jake and Vienna have split and appreciate the respect for their privacy at this time.”

The pair portrayed a happy couple as of recently. Vienna was on hand for Jake Pavelka’s Dancing with the Stars performances — cheering him on during every twirl and leap.

Just this past March, the not so liked Vienna, alluded to babies eventually. “We want five kids,” she gushed to E! during an interview.

So how does it go from love and babies to on the outs? Perhaps it’s because Jake Pavelka can’t stop chasing the acting bug. He’s been filming a guest spot on Lifetime’s drama Drop Dead Diva.

Whatever the reason for Jake and Vienna’s apparent break up, one question and the most important remains — wonder what she’ll do with that $50,000 Neil Lane ring? According to TMZ, Vienna gave the ring back to Jake.