Tim Gunn of Project Runway has a fashion story or two up his sleeve, and one of the best is about infamous Vogue editor Anna Wintour. 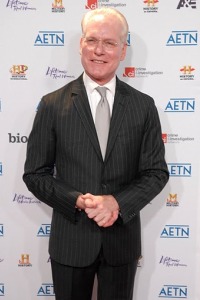 “I was with a colleague from Parsons, and we had been discussing the will-she-or-won’t-she-take-the-elevator question, so we ran over to the elevator bay to see if Anna would deign to get on. She wasn’t there. Then we looked over the stairway railing. And what did we see but Anna being carried down the stairs. The bodyguards had made a fireman’s lock and were racing her from landing to landing. She was sitting on their crossed arms.

“I ran to the window to see if they would put her down on the sidewalk or carry her to the car like that. They carried her to the car. And I thought: I will never forget this. That diva move makes Mariah Carey look meek.”

Wintour’s peeps say the whole thing is ridiculous. A spokesman for Vogue told Page Six, “Tim Gunn has a very vivid imagination. There is no truth to any of this.”