Eclipse arrives in theaters June 30 and we have three don’t-miss scenes from the most anticipated movie of the summer! 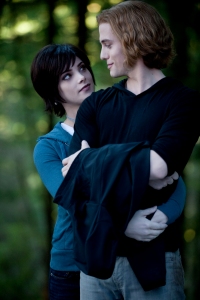 We have already interviewed Robert Pattinson, Kristen Stewart and Taylor Lautner and the stars of Eclipse could not have been more excited about the third chapter in the Stephenie Meyer Twilight series.

Now, SheKnows is ready to take you inside the film itself with three new clips, courtesy of Summit Entertainment.

In Eclipse, the battle comes to Forks, Washington, in the form of a vampire army created by Victoria for the sole purpose of exacting revenge on the Cullen family — especially Edward and Bella.

In the first of our clips from Eclipse, SheKnows introduces you to the vampire army of newborns.

Led by Riley (Xavier Samuel), the vampires leave Seattle with one mission: To destroy Bella and the Cullens.

The Vampire Army clip takes you inside the background of the army and how it will be used against Dr Cullen and his family. What the vampire army is not expecting, is the unlikely alliance between Taylor Lautner’s Jacob and his family of wolves and the Cullen’s vampire clan. Who has the upper hand now?

In our second clip from Eclipse, Summit Entertainment takes SheKnows readers on the thrill-fest that is Eclipse. Part preview, part clip compilation, the Legend clip is fittingly titled as Eclipse looks to be the best of the Twilight films.

We take you inside Bella’s bedroom in our next clip that showcases Bella’s (Kristen Stewart) desire to become a vampire so she can live alongside Edward (Robert Pattinson) forever. “You will always be my Bella,” Edward states in the below clip. Fans of Twilight know that this is the case, however, for much of Eclipse, that fact seems up in the air as the battle looms and Jacob continues his fight for Bella’s heart.