Just because they’re heirs to the throne, that doesn’t mean that they can’t behave like royal imbeciles. England’s Princes William and Harry decided the best way to raise morale for their country’s soccer team, who had an unexpected tie with Algeria in the FIFA World Cup, was to act the fool, according to Prince William. 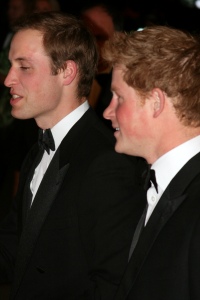 “When the guys went into the changing room they were fairly upset with how they played, but by the time we finished, we’d laughed and joked,” Prince William said of the princes’ post-game locker room visit alongside David Beckham on Friday. “Harry and I behaved like idiots. We tried to get David in on the act as well, and the three of us tried to raise some spirits.”

Prince William, who turns 28 today, must be enjoying his time in South Africa for the World Cup, away from the prying eyes of his nation who are all breathlessly awaiting a marriage proposal to his longtime girlfriend, Kate Middleton, thanks to an off-hand comment the prince made to a reporter in a nightclub years ago.

At the time, no doubt when he was a little tanked, he said he didn’t plan on getting married until he was “28 or even 30.” Since then, the UK has been counting the days until the possible engagement around the eve of this birthday.

We seriously doubt the future king has any plans to celebrate his birthday by popping the question to his on-again-off-again girlfriend of seven years, but at least it gives British tabloids something to write about on slow news days.

Besides attending World Cup soccer matches while in South Africa, Prince Harry spent two days in Mozambique learning about the work of a British landmine clearance charity, a cause that was always close to his mother’s heart. 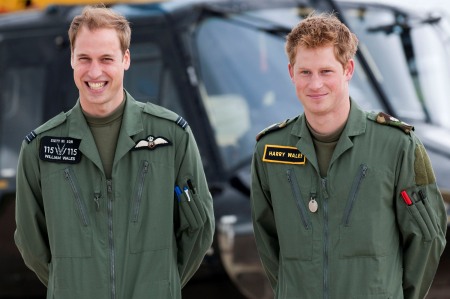 Speaking of pictures, we couldn’t help but notice something while glancing at photos of the two princes sitting side by side at the England-Algeria game; they look nothing alike. We’re starting to seriously believe the longstanding rumors that James Hewitt is actually Harry’s father. Slowly but surely William is turning into Prince Charles, right down to the thinning hairline (question: Don’t they have Propecia or Rogaine in England?), while Harry just gets hotter and hotter.