Michael Jackson was broke, desperate and aiming for a comeback when he died last June. New reports calculate the King of Pop’s estate has made $1 billion dollars since his shocking death.

With the first anniversary of Michael Jackson’s death upon us, the late King of Pop is on everyone’s mind. According to the reports, however, he’s been with us all year and his estate has the earnings to prove it. 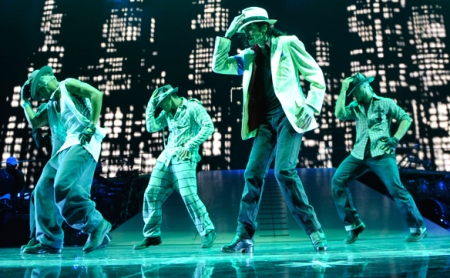 Taking into account the massive sales of his albums, a big Sony record deal, the record breaking success of This is It and more, Billboard estimates that Michael Jackson has banked at least $1 billion in revenues, posthumously.

According to the numbers Billboard dug up, along with some reasonable estimations, Jackson’s music sales alone have brought in $429 million.

Michael Jackson: This Is It hit theaters October 28, 2009 and earned $260 million globally, making it the highest grossing concert film ever made. After AEG recouped their losses for the canceled concerts, which exceeded $35 million, word is Jackson’s estate took in as much as 90-percent of the profit.

This Is It DVD purchases and rentals, Viacom’s payment for broadcast rights and the licensing fees paid by airplanes, cruise ships and hotel chains also reflect staggering numbers to reach that $392 million total.

Billboard tacks on another $130 million for music publishing, accrued through both Michael Jackson’s music publishing company, MiJac, and his partial ownership of Sony-ATV.

Then there’s $35 million in licensing and touring. While Jackson’s 50-show tour hoped to bank $100 million, plus around $15 million in merchandise, the cancelation after Jackson’s death wasn’t a total loss.

Many fans kept their tickets as souvenirs, instead of recouping the cost, concert merchandise sold well, and AEG’s memorabilia exhibit in Japan earned Jackson’s estate $3.5 million and is still set to hit China. There are also other licensing royalties and retail sales to account for, including video games coming out this Christmas.

Billboard caps the earnings off with a $31 million record deal with Sony Music, which now plans to release 10 albums of Jackson’s music by 2017, starting with a collection of new tracks this November and a reissue of 1979’s Off the Wall expected next year. That $31 million only covers one year of that contract.

With the known payments and earnings, the math adds up to $783 million, but Billboard tacked on guesstimates for some of the unknown figures to name Jackson a “Billion Dollar Man.” Not a bad year’s work and let’s hope that most of it lands in the hands of Michael Jackson’s kids!