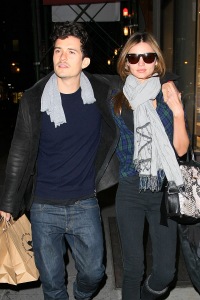 Extra, who broke the news first, reported the actor’s rep confirmed the news to People magazine. Bloom, 33, and Kerr, 27, began dating back in 2007 after meeting through a mutual friend.

The couple has tried to keep their romance under lock and key, but when you’re dating Orlando Bloom it’s kind of hard.

“Everyone asks me to talk about him and they get really annoyed with me when I say no,” Miranda Kerr, the Aussie born model, told New York Post’s Page Six magazine in 2008. “But if you want to know about him, why don’t you go and ask him? I’m sorry but that’s just how it is.”

Kerr has recently been seen out and about promoting Victoria’s Secret’s summer Miraculous line. The bombshell also posed for a steamy yoga-inspired spread in the June issue of GQ magazine.