Never visit the New York Yankees’ clubhouse after a loss — even if you’re Lady Gaga.

Lady Gaga displayed some questionable behavior in the Yankees’ clubhouse after a depressing loss to the Mets Friday night. According to the New York Post, Lady Gaga’s drinking and self-fondling infuriated club executive Hal Steinbrenner so much he banned the artist from the clubhouse for life — but that’s only half the story. 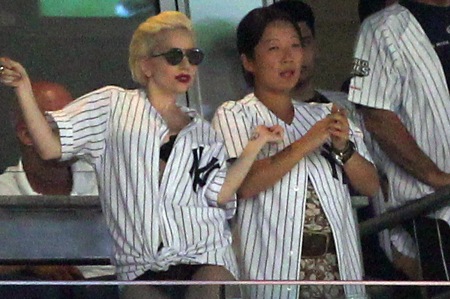 Lady Gaga clad in a half open, underwear exposing, Yankees jersey and fishnet stockings — decided to pay the losing team a visit in their clubhouse.

A source told the New York Post, “The songstress and two girlfriends sauntered their way into the Bombers’ clubhouse — without team approval and hung out for 30 minutes after the team lost to the Mets.”

The source went on to say, “She met six players — including Alex Rodriguez and Robinson Cano — and kept slurring her words trying to say how much she loved the Yankees and how thrilled she was to be inside the exclusive area.”

But what was her real crime? According to general manager Brian Cashman, she invaded the clubhouse after a loss. He is making it clear the singer — a longtime Yankees fan — is definitely not banned.

“She’s not banned,” Cashman told reporters. “Celebrities aren’t banned. If Michael Jordan showed up here he would have access to the clubhouse, but not after a loss. That’s the wrong time and the wrong place. It’s been taken care of.”

I’d hate to see if the ban was indeed true. I don’t think that would sit well with Lady Gaga’s devoted little monsters.