Heidi Montag hires a divorce attorney and we ask: Is it the real deal or a publicity stunt? 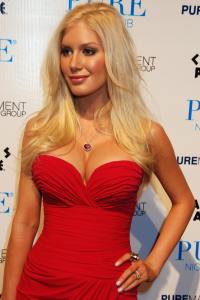 According to TMZ, Heidi and Spencer are closer to finalizing their divorce than anyone thought.

TMZ is reporting Heidi Montag has retained lawyer Jodeane Farrell to mediate her divorce. The lawyer, who has 24 years of family law under her belt, is not holding back either as she is looking to make this divorce happen in the fastest way possible.

The hotshot mediator and longtime Montag family friend will be arranging a meeting with the couple in about two weeks.

Both parties are on board for a divorce mediation, which means the couple will more than likely figure out a property settlement privately, wait the California required six months and the marriage will be dissolved.

If this all seems too easy, you’re probably right. Spencer might have agreed to divorce mediations, but he still has to agree to Montag’s choice in mediator.

Farrell told TMZ she is confident when she meets with the two, she will have no problem mediating the deal.

Does this mean a peaceful end for America’s favorite reality show couple? Everything is “very amicable,” Farrell added. We’ll see!

Read on for more Heidi Montag and Spencer Pratt