Constance Zimmer, who plays Entourage’s Dana Gordon, is having one busy summer. Zimmer has been promoting the return of Entourage and now has a wedding to plan to add to her list. 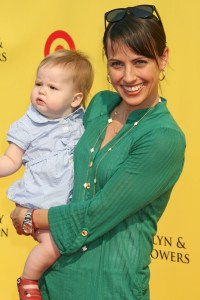 Constance Zimmer’s rep has confirmed to People the star is engaged. Zimmer and Russ Lamoureux, her boyfriend of three years, will reportedly walk down the aisle in the fall.

The actress and her groom already share a daughter, Colette Zoe, born in January 2008.

With a wedding in the works and a hit show returning to prime-time TV, Constance Zimmer found time to shed some light on her Entourage character’s nice side in the new season.

“I’m so excited,” she told AccessHollywood.com earlier this week at the premiere of Entourage. “It’s kind of a softer side of Dana. Jeremy Piven and I didn’t have to scream at each other to get something done.”

Read on for more celebrity weddings