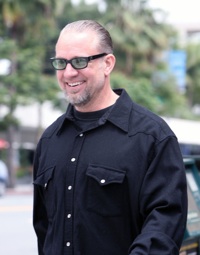 Jesse James had been awarded full custody of daughter Sunny — thanks in no small part to the stability afforded by next soon-to-be ex-wife Sandra Bullock — but the judge recently gave Janine unmonitored visitation after she graduated from a halfway house drug treatment program.

Jesse James’ sister said Janine Lindemulder called her two years ago saying she was letting a then four-year-old Sunny drive to the store for “munchies” because she had taken “some numbing drugs her neighbors gave her from Mexico and she drank tequila.”

Sergeant Mark T England, Jesse James’ brother-in-law, wrote in his declaration that Janine once asked him to score drugs in his capacity as an Army medic, including Soma, Vicodin, Lunesta and Ambien.

Even Janine’s own husband, Jeremy Aikman, wrote a letter to the court saying that she shouldn’t be trusted alone with the child. He wrote, “Janine is a very unstable person. Her moods change every 10 minutes. It’s like she has multiple personalities.”

“She abuses every prescription she gets. She obtains prescriptions from the doctors for 20 vicodin and proceeds to get them off the street.”

Jeremy goes on to say that Lindemulder returned from that halfway house worse off than when she got there and that their home is “not a safe environment for children.”

But the judge refused to reverse her decision, and Janine Lindemulder still gets unsupervised visitation. Crazy, right? Here’s why:

Jeremy changed his mind and submitted a second declaration to the court stating Janine is actually fine. Why the change of heart? Sources say he was worried his wife would hurt herself, and felt guilty.

Meanwhile, a little girl is put in the middle.