Dina Lohan just wants to have her cake and eat it too. Watch out Carvel ice cream shop, Lindsay Lohan and her clan are coming after you! 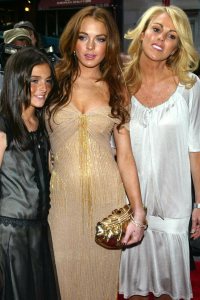 Dina Lohan tried to pick up a cake from the New York ice cream shop Wednesday, but was denied after she produced Carvel a Black Card, which supposedly granted her free ice cream for 75 years.

Lohan told RadarOnline.com, who first broke the story, “The shop assistant said: Do you have ID? Next minute, he grabbed my arm and took my card and held it hostage and wouldn’t give me the cake! This guy was crazy!”

So what was the source of the chaos? Apparently everyone in the family was issued their own card, and Dina’s sticky hands grabbed daughter Ali Lohan’s.

“I couldn’t believe this guy. It’s a family card, it just didn’t have my name on it.”

Dina Lohan went on to say, “Next minute, four cop cars showed up, there’s a police helicopter overhead and this guy makes it seem to the cops that I’m trying to use a stolen credit card — and for what? Over a free ice cream?!”

Even after failed attempts to explain the situation, the employee was still reluctant to return the card to Dina Lohan. “You can have the card, but you can’t have the cake,” the Carvel worker reportedly told Dina Lohan.

Dina added in a manner that is so classic to the Lohan matriarch, “It just shows how we get treated so much worse than regular people.”

Carvel: Their scoop on Lohan

In a statement, Carvel says the infamous Black Card was originally issued in Lindsay’s name only as part of a promotion. The company went on to explain that, “Unfortunately, the Lohan family has been abusing the card. While the card was issued in Lindsay’s name only, her extended family has repeatedly used the card without her present. At first, we graciously honored their requests while explaining that the Black Card was not a carte blanche for unlimited Carvel ice cream for the extended Lohan family and friends. After more than six months of numerous and large orders for ice cream, we finally had to cut off the card and take it back.”
Eventually the card was returned, but not before Dina detailed her revenge on the company:

“Just wait until Lindsay and Ali hear about this,” she says. “When Ali gets back, I’m going to bring her in everyday to this store — and you can print that!”

I think Lindsay Lohan might have other things on her mind, such as an alcohol monitoring bracelet. I’m just saying.