She’s that sexy blonde of a certain age who won our hearts in the wine country relationship sleeper Sideways and in a notable guest arc on Monk and he’s the hunk who looks great in a uniform in the long-running series JAG. Put them together and they are the hot couple at the center of ABC’s new crime family dramedy Scoundrels.

We’re with the stars of the new series, based upon a popular New Zealand show called Outrageous Fortune, to scope them out as a screen couple and get their takes on the interesting characters they play; the married heads of a family of con artists who semi-attempt to go straight. 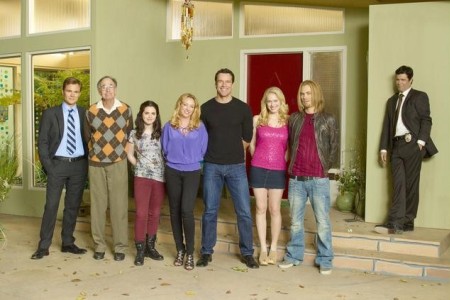 We were impressed that Virginia Madsen is very adamant about the importance of a family (crime or straight) sitting down to dinner in our busy, distracted modern world.

Virginia Madsen and David James Elliott (JAG) were interviewed separately and each actor seems to think the other is pretty darn “hot.” When asked to describe her co-star, Virginia rolls her eyes and mouths, “Yum!”

We cornered Virginia Madsen first and found her completely relatable as she tried to get her son to stop constantly texting her during the interview and worried about eating too many tiny muffins at the ABC crafts services goodie bar provided for our press day. “But they’re so tiny.” “Yeah, right. Those little things keep calling me from the commissary.” We hide our tempting mini-muffin under our chair and we’re off…
S 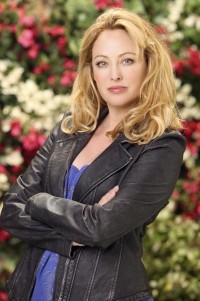 heKnows: Can you talk about this unusual family in Scoundrels? Was that what attracted you?

Virginia Madsen: Actually what attracted me was that it was a family, and that it was a really tight-knit, close family, and I particularly loved that they sit down for dinner together. I know that sounds so simple but it’s a really important thing to me in my own life, and I think it’s an issue that breeds the downfall of the American family. People aren’t sitting down and having dinner. And so here is this totally, kind of outrageous crime family, and yet I’m trying to maintain this sense of normalcy by sitting down and having dinner. It is what I do in my own life. I’m an actress, that’s my day job, but at night I still try and sit down and have dinner with my son.

SheKnows: How do you find the time to make a meal?

Virginia Madsen: You know what? If I’ve got time to cook, you’ve got time to cook. Honestly, it takes less time to cook a dinner than it does to go through the In-n-Out drive-thru, and I do hit the In-n-Out drive-thru, I do admit that because it’s kind of my weakness. But you’re not just feeding them good food, you’re really teaching your children how to care for themselves, and also they have to face you. People sit down and have dinner and you have to deal with one another. And so it’s something that I did on location (in Albuquerque, New Mexico) too. We had Sunday night dinners with all the cast and that has actually brought us such a closeness. We’ve taken that bond and it has translated to the screen.

SheKnows: Can you tell us a little about the family and particularly your part? You’re the mom who is trying to go straight, right?

Virginia Madsen: Yes, because my husband goes to jail and so I really take this to heart and I decide that the whole family is going to go legit and we’re all going to get real jobs. And my 15-year-old, who has been blackmailing the school principal so she doesn’t have to go to class, gets totally busted, and I assure the principal that her attendance record from now on will be spotless. So, needless to say, my daughter is quite upset about this new development. Everyone’s upset about it, and I try to have a real job. It doesn’t go over well. None of it goes over well.

SheKnows: And David James Elliott plays the hubby behind bars. Does he still have a hand in the family? 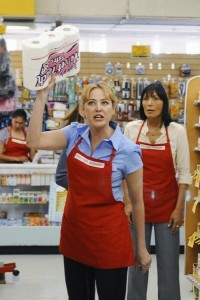 Virginia Madsen: My kids keep trying, and then my husband keeps trying to manipulate from behind bars to arrange things, because he thinks it’s so adorable. “Oh isn’t that sweet, she wants her kids to be upstanding citizens. Ahhh.” And this just enrages me. But then I’m in love with him.

SheKnows: And how was it working with the gorgeous Mr Elliott?

Virginia Madsen: [Rolling her eyes and making a “Yum” sound] Listen, man, have you seen him? I have a really hard time memorizing my lines when I do scenes with him. We have a tremendous chemistry and I feel very distracted by him. But you know what? He really is, in all seriousness, a wonderful actor to work with. You never know until you get there and you are on location and you’re faced with the person. You can’t act chemistry, you just can’t make that up. You can be great actors but you still can’t make that up because the camera doesn’t lie.

SheKnows: So you guys have got “it” then?

Virginia Madsen: We have it! We have a powerful chemistry, him and I, and it was almost like we knew each other and it gives us a lot of freedom to experiment. I like to do every take different, and he goes with that and so working with him is sometimes like dancing, sometimes it’s like fencing. It’s just so much fun.

SheKnows: Did you know him before the show?

Virginia Madsen: No. I knew him from JAG, but I just thought he was that guy. I was having one of my Sunday dinners, and so he called me, he was at the airport, and I totally manipulated him. I said, “So do you want to come over straight from the airport or do you want to leave your things at the hotel and then come over?” Luckily he was game and he showed up, and the whole family was there. God bless him, he just allowed us to shower him with love, because when he walked in the door everyone screamed and the kids were all over him and he was kind of like, “Oh my God, this is amazing,” and so he was baptized and he was immediately part of the family. And in a way he made us complete, he really did, there was such a sense of completion when he got there, such a sense of a whole family that it was kind of like, “This is really happening, right? Yeah, it’s real.” And it’s rare that it happens that way, but it’s true.

SheKnows: Did you see the original series, Outrageous Fortune?

Virginia Madsen: No, I didn’t know about it and the show creators asked me not to see it because I thought, “Oh, that’s the first thing I should do,” and they said, “No, no, no, we want you to make your own Cheryl, we want everyone on the show to do their own thing.” So we’re almost finished now, so now I think I could see it. And then I think we should guest star on each other’s shows.

SheKnows: We notice you have a cool tattoo. What does your tattoo say? 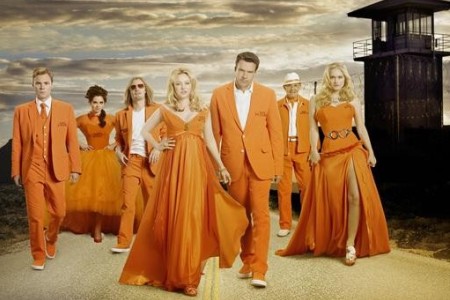 SheKnows: This means love. It’s a Japanese symbol, I think it is, and then the guy didn’t speak English so for all I know…I got it after my son was born. Antonio (Sabato Jr, her ex) and I brought him to Rome to meet the Italian side of the family, so we both got one.

SheKnows: Can you talk about your time on Monk?
Virginia Madsen: Oh, it was a lot of fun, and I did that because, in the last four years, I’ve been really studying comedy and really trying to work around people that teach me, and work with people that know more than I do, which is not so hard since I don’t know anything about comedy. It’s a lot harder than drama.

SheKnows: Are you drawing on that for this show?

Virginia Madsen: Yeah. I learned so much also from being on that set, because they also had a feeling of family on Monk and they’ve been doing it for all those years. Now, I know it can be done, I know you can get along for that many years without it being a nightmare. I’ve just heard that it’s really hard to do a one hour show. You have no life. That part is true, but that it’s a real drain, and this could not be more fun so I wanted to create that atmosphere on my show.

SheKnows: Do you think shooting away in New Mexico is helping that?

Virginia Madsen: Yeah. I think the next season we’re going to shoot at home, but it was a real blessing in disguise to be shooting there, because we’re cloistered in a sense, we have only each other. We’re all away from home so we’re all sort of clinging to each other, there’s no other distractions. I think Leven (Rambin), who plays my daughter, was like, “It’s because there’s not 50,000 dweebs distracting us.” And I was like, “Yeah, that’s right.” Because we can be closer, and we have nothing to do but our job, go to the gym, go to work.