Adam Lambert sported a new look Thursday, and it might not be what Glamberts had hoped for — a shaved head! Glam never looked so good! 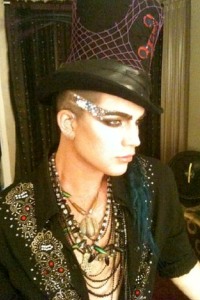 Adam Lambert debuted the new hairdo on Twitter. The star tweeted showing a picture of his buzzed melon peaking out of a top hat.

But wait, there’s more. Hoping to ease his fans’ fears over losing his beautifully tinted blue locks, Adam Lambert sent out this tweet, “Calm down… Just shaved one side…”

Not sure if half a shaved head is better than just hacking it all off, but if anyone can pull it off, Adam Lambert can.

Adam Lambert is currently taking on his own solo tour, Glam Nation, and promoting his new single, If I Had You.

Is it us, or does Adam Lambert look a little bit like Boy George?

Read on for more Adam Lambert