Toy Story 3 stars Tom Hanks, Tim Allen and Joan Cusack get a little awestruck when they discuss their film. Tom Hanks, in particular, admitted that the Toy Story 3 journey has been one of continual impressiveness. “These Pixar people continuously amaze me,” Hanks said.

“They come up with something that actually takes place in the happy, real-world place. And every plotline is very, very plausible. It’s written with characters that have a very real dimension. It’s funny. It’s cracked with adventure, jeopardy, humor and love.” 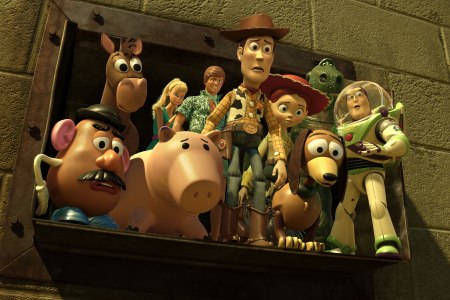 Tom Hanks plays Woody opposite Tim Allen’s Buzz Lightyear in Toy Story 3, and returns to the Pixar family knowing that this is one Hollywood company who has never let technology overpower story. “Motion pictures now are probably just beginning to live up to their true potential of being this immersive experience going from beyond black and white flickering images to fully immersive 3-D, high-definition. You don’t even know where the real world starts and the fake world begins,” Hanks said.

Joan Cusack stars as Jessie and concurred with Tom Hanks about the magic of Pixar and the Toy Story franchise. In fact, in this writer’s opinion, it is one of the best movies of the year. Period. 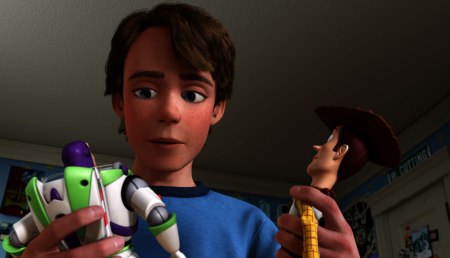 One of those themes that permeate all Pixar films is the power of friendship. Tom Hanks found the connection between Buzz Lightyear and Woody one that would resonate for generations. “They started off as pure adversaries and learned how to accept each other’s strengths, forgive each other as individuals,” Hanks said. “That right there, it’s opposites attract. You need somebody to compliment you. You can’t know everything. It’s nice to turn to somebody like [pauses] Buzz [laughs] when you have a question. And you got to respect Buzz’s answer.” 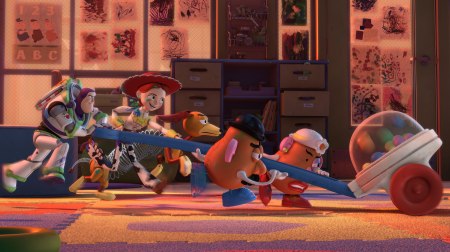 Hanks also adored his character’s ability to throw himself into any situation. “Woody’s a passionate guy,” Tom Hanks said and laughed. “You notice how Woody runs across a lawn. He does it full boar [laughs]. He doesn’t hesitate for a moment. As soon as he has an instinctive thought of: I have to help them, or, I have to run away — he does it with 100-percent commitment. You gotta love that about anybody.”

Tim Allen instantaneously fell in love with the new toys in Toy Story 3, particularly the Michael Keaton-voiced Ken. “I was laughing so hard at Ken. I saw the first drawings of Ken and (Michael) Keaton brought that alive. He does a fashion show for Barbie. I’m dying. It’s real funny,” Allen said and laughed. “I like the new toys. They’re just wonderful.”

In one of the most hilarious moments on screen in Toy Story 3, Buzz Lightyear has his hard drive rebooted and when he comes back, he can only speak Spanish. “Buzz is fun for anyone like me, who is a computer geek. He’s got a reset button. There’s auto-run, which most kids will understand for a demo, or default stage. Well, Buzz reset and they couldn’t get the right language,” Tim Allen said. “So, for a while, he speaks perfect Spanish.” 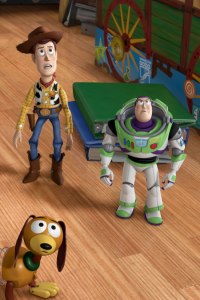 Why did Tim Allen feel it was time to return to the Toy Story world for Toy Story 3? As Tom Hanks said earlier of Pixar films, it comes down to story. And in this Toy Story chapter, the story is equally as comedic as it is compelling. “The toys quickly are thrown away by mistake. They get to Sunnyside, a day care center, which looks like it’s a great thing. It looks like heaven for these guys,” Tim Allen said. “They’re with a group of kids who don’t know how to respect toys and they break them. It becomes absolute purgatory for these toys.”

Joan Cusack added that Toy Story’s perspective is at the core of its success. “I love that about the toys that all the Toy Story movies are from the point of view of the toys,” Cusack said.

Tom Hanks leaves with some words of wisdom.

He speaks not only about Toy Story 3 and Pixar, but also about Pixar’s cinematic miracles and their recipe for success: Technology meets sweeping story and produces movie magic. “It’s just going to become more and more so, and yet, with that, none of that is going to matter unless the story and the emotions are something that we can recognize,” Tom Hanks said. “And again, Pixar and Toy Story are able to do this in ways that almost defy speculation. Toy Story will always be the most amazing thing you’ve ever seen.”

Read on for more Toy Story