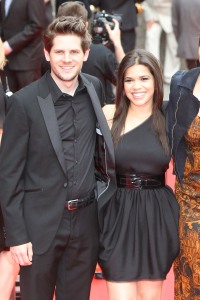 Ferrera’s new diamond ring made an appearance Wednesday, at the Edinburgh Film Festival in Scotland. The actress, 26, was on the scene attending a screening of The Illusionist.

America Ferrera and Ryan Piers Williams met at the University of Southern California while the two were students. He had such faith in his future bride, Williams cast America Ferrera in one of his student films while at USC.

Engagement rumors once plagued the duo in 2007. “It’s totally not true!” America once told W magazine. “And his mom called me and my sisters were calling me, and I was like: Are you kidding? Did you not think I would tell you first?”

The couple will definitely be on our wedding watch list. Congrats!