It’s still a year away but Sony is already hyping their 3D live action-animated Smurf movie, also known as Avatar 2 for the junior set.

Moving from landmarks like the Sphinx and the Eiffel Tower, each getting blasted blue, the teaser lands in New York City’s Times Square, kicking into a mash-up of Tone Loc’s Wild Thing and the cartoon’s classic theme song as three blue heads pop into the frame. 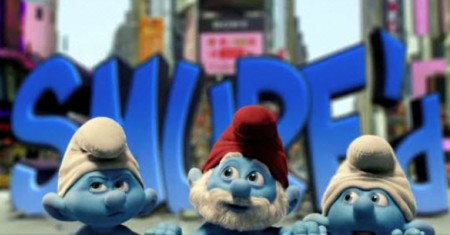 The teaser trailer for the first of a proposed trilogy of Smurf flicks is introduced by Neil Patrick Harris, America’s new favorite triple threat. Since dropping the mantle of Doogie Howser, thanks to hilarious turns in Harold and Kumar and How I Met Your Mother, Neil Patrick Harris has become one of Hollywood’s hottest commodities.

So why, oh why, did Harris agree to introduce a film trailer in which he stars (unanimated) during what looks like his break as a cologne spritzer in Macy’s? Hopefully Sony will throw more behind the film’s production values than they did for their first mini-tease. Seriously, people, rent some lighting equipment!

We loved the Smurfs when we were growing up. Knowing Harris leads the charge on this big screen adaptation gives us hope that the film won’t go the way of Garfield or Alvin and the Chipmunks.

In their first film, the Smurfs will start out in their original setting, a forest in Europe in the Middle Ages. While running from an attack by their archenemy Gargamel (played by the brilliant Hank Azaria) some of the Smurfs stumble on a portal that takes them to present day Central Park. Lost in New York, they befriend several humans, including Neil Patrick Harris and Glee guidance counselor Jayma Mays to do battle with Gargamel.

Is it just us, or does this sound exactly like Enchanted? With any luck, it’ll be half as good. Thanks to an outstanding cast, we have high hopes.