Angelina Jolie, in her role as Goodwill Ambassador for the UN, made a video plea to the world to not ignore the global epidemic of refugees on World Refugee Day.

Angelina Jolie, without her newly shaven husband Brad Pitt at her side, speaks directly to the camera in the compelling and emotionally powerful video. The 30-second spot highlights the international day to commemorate one of the world’s most depressing blights — refugees. 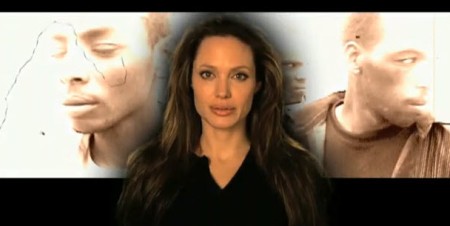 In one of the most compelling aspects of the Jolie video, Angelina Jolie stated, “Please remember the millions of people around the world forced from their homes –because the only hope of return is to not be forgotten.”

Jolie, in her role as UN Goodwill Ambassador, has traveled to over 20 countries raising the profile of the plight of people in all those nations. Appointed to the ceremonial position in 2001, Angelina Jolie has set a benchmark for the position that has also since been bestowed upon Nicole Kidman and George Clooney.

World Refugee Day will be marked by Angelina Jolie and hundreds of millions on June 20. To find out how you can contribute or be a part of the world unifying day, visit the UN.