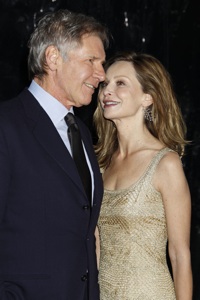 The couple, who have been together for almost eight years, married on June 15, in New Mexico. Governor Bill Richardson performed the ceremony, which was held at the Governor’s mansion in Santa Fe, according to TMZ.

Harrison Ford’s first two marriages were long-lived — he was married to Mary Marquardt for 15 years and Melissa Mathison for 18 — and may explain why it took so long for the serial monogamist to take the plunge again.

The couple ?met at the 2002 Golden Globes and began dating shortly thereafter. They have been raising Calista? ??F?l?o?c?k?h?a?r?t’s ado?pted son Liam together for years. Harrison? ???F?o?r?d? has four children from his previous marriages.

Why New M?exico? Harrison Ford is busy filming his next flick there: Cowboys and Aliens, a sci-fi Western directed by Jon Favreau.

Indiana Jones and Ally McBeal — who’d have thunk it?