Brooke Mueller is reportedly not heading back to rehab — depending on your definition of rehab. 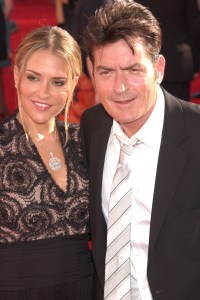 Reports broke Tuesday that Brooke Mueller, Charlie Sheen’s wife, who entered rehab for a crack addiction back in February — is checking back in for substance abuse help.

Her rep Elliot Mintz, however, is telling a different story: “What we are really talking about is not rehab. Brooke is receiving professional help in the area of stress management.”

In a string of peculiar incidents, news also broke Tuesday that Charlie Sheen’s car was stolen and driven off a cliff — again. Four months ago the exact same situation happened to Charlie Sheen.

Brooke Mueller and Charlie Sheen have yet to sign legal divorce papers according to Sheen’s rep. Even without a legal divorce settlement, the two have not been living together since Sheen’s Christmas Day arrest.

Charlie Sheen was arrested on domestic violence charges. But according to the Two and a Half Men actor’s rep, the estranged husband and wife do have a plan if divorce comes their way.

“The only thing they signed was an agreement regarding terms if they ever decide to divorce. No more; no less.”

Read on for more Charlie Sheen and Brooke Mueller