Tiffani Thiessen gave birth to her first child, a girl, on June 15. 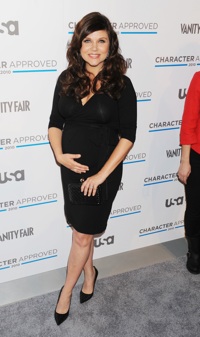 Tiffani Thiessen and her husband, fellow actor and artist, Brady Smith, welcomed little Harper Renn Smith into the world in Los Angeles. Her rep told People the new mother and child — who weighed in at eight pounds, three ounces — are “doing great.”

Thiessen’s cast mates on the hit show White Collar say she was born to play the role of mom.

“She’s totally the den mother of the show,” said costar Matt Bomer in February. “She’s so organized and so loving and generous — that can only make her an absolutely amazing mom.”

Tiffani Thiessen and Brady Smith wed in 2005 and have yearned to be parents ever since. Upon announcing her pregnancy, the couple said that starting a family is “something we’ve wanted for a long time and we are thrilled that it’s actually happening.”

Thiessen rose to fame on the hit tween show Saved by the Bell, then continued on to another huge hit, the original Beverly Hills, 90210.

Tiffani Thiessen has since parlayed her early fame into a tidily successful television career. Brady has played roles on such shows as JAG, Charmed, CSI: Miami, ER, The Closer, NCIS, The Mentalist, Ghost Whisperer, and CSI: Crime Scene Investigation.

Sheryl Crow adopts another boy
Mariah Carey will announce pregnancy on her own terms
Is Khloe Kardashian pregnant?