What’s in South Africa, round, bouncy and capturing everyone’s attention? We’ll give you a hint: It’s not the soccer balls at the World Cup — it’s Kelly Preston’s baby bump! 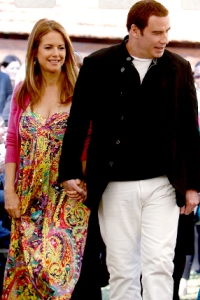 This weekend, just one month after announcing she was pregnant with a third child, Kelly Preston, her husband, John Travolta, and their 10-year-old daughter, Ella, touched down in the family’s very own Boeing 707 airplane (those Grease residuals have been kind to Johnny Boy) at Lanseria Airport near Johannesburg, South Africa.

In black pants, a gray shirt and black blazer, Kelly Preston, 47, who is reportedly four months along, exited the plane smiling and looking very happy as she waved to the crowd. The couple is reportedly attending the World Cup in support of the Australian Socceroos soccer team.

The Socceroos are sponsored by Qantas Airlines, a company with long ties to Travolta, 56, who is not only a goodwill ambassador for Qantas, he’s also undergone extensive pilot training with the company and is certified to fly 747s and their double-decker A380 superjumbo jet.

John Travolta and Kelly Preston were next seen on a visit to the Nelson Mandela Children’s Fund where they donated $10,000 to the organization, according to a report by People Magazine. Mandela established the organization to develop partnerships and programs which empower and improve the well-being of children and youth, and promote the rights of children through public policy and social awareness.

In a long, flowing, psychedelic paisley-printed maxi dress and fuchsia cardigan, Preston looked happy and healthy alongside her husband. It’s a great sight to see after all the sadness and tragedy the family has endured in recent months. 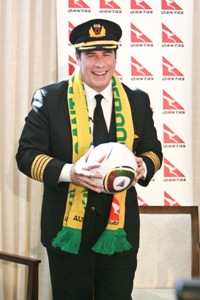 In January 2009, John Travolta and Kelly Preston’s 16-year-old son Jett died suddenly of a seizure and last month two of the family’s dogs were killed in a freak accident.

Now on to happier times, on May 31, the couple announced they were expecting a new baby, posting the news on their personal web site. “It’s impossible to keep a secret, especially one as wonderful as this,” they wrote. “We are expecting a new addition to our family.”

Last week, Kelly’s mom, Linda Carlson, told Us Magazine, “We are over the moon. I’ve been praying that this would happen, especially since Jett’s death.”

“We tried for several years, and we didn’t think it was going to happen for us,” the couple said in an interview with People Magazine. “This is a miracle, and we feel blessed.”

It’s great to see the Travolta family on the mend.

Read on for more Kelly Preston and John Travolta