Katy Perry sits atop the charts with California Gurls featuring Snoop Dogg, but what grabbed headlines last week was her opinion on Lady Gaga’s video for Alejandro and its “blasphemous” nature. 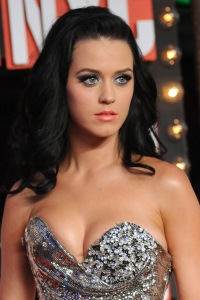 Perry is out promoting her upcoming album release and basking in California Gurls’ number one success.

Meanwhile, Katy Perry has been dogged with questions from the press concerning whether she really believes that Lady Gaga is blasphemous in her incredibly creative Alejandro video.

“It’s just kind of deeply rooted inside of me, and hard to get away from,” Katy Perry said of her feelings on not using God’s name or image in a blasphemous way. “But everybody knows I am a massive Lady Gaga fan. If you look through my tweets, there will be about 10 of them that say I am obsessed with her.”

Katy Perry went on to explain to Entertainment Weekly that she is simply opinionated when it comes to the Lord. “Lately, I’ve just been seeing some things that are kind of…not something I would do, I guess,” Perry said. “Like, when Madonna was on the cross. And, like, sometimes my boyfriend (Russell Brand) will say things that are…from where I come from, it’s hard for me to say that.”

Looks like Russell Brand’s been in the doghouse for using God’s name in vain.

But, when it comes to Lady Gaga, Katy Perry has the ultimate respect. “I’m a massive fan,” Perry said. “Using blasphemy as entertainment is as cheap as a comedian telling a fart joke.”

Perry went on to explain her comments about blasphemy were not directly aimed at Lady Gaga. The press, in fact, took the comments and made a fight about it; something she believes is done too often — pitting women against women.

“Everybody made it out to be a cat fight. I think people love cat fights,” Perry said. “It’s a turn-on for people.”