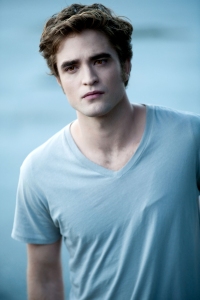 In Eclipse, Pattinson’s Edward has grown more into his vampire skin. The Twilight Saga: Eclipse star sat down with SheKnows at the Beverly Hills Four Seasons, and was dressed casually and had a new haircut! What would Edward think?

“I didn’t even think about that,” Robert Pattinson said and laughed. “Vampires can get haircuts. Can’t they?”

Click here for a quick bio on Robert Pattinson >>

SheKnows: Taylor Lautner, as Jacob, has the best line in the film when he says, “I’m hotter than you.” How badly did you want a comeback line?

Robert Pattinson: [Laughing] There’s nothing you can say. “Yeah, you are!” or “At least I’m not hotter than you!” I don’t know. Yeah, it was quite fun. Jacob has quite a few catch phrase type of lines, with me especially. For some reason, I find it quite funny when I’m doing stuff with Taylor.

SheKnows: You get to work with Taylor Lautner more in Eclipse than in the past. Although you are at each other’s throats, so to speak, working with Taylor more closely must have been a nice change.

Robert Pattinson: There are a couple confrontational scenes, where I push him around a little bit, and I thought I’d really scare him and grab him, and it would freak him out and turn the whole scene upside down. Then, I grabbed his shoulder and it was too big to actually get a grip on, so I just dropped my hand [laughs]. It was embarrassing. I got him badly, though. He kept having to dress up in a little gray spandex wolf suit and try to be intimidating with Kristen patting him on the head. That was quite fun. 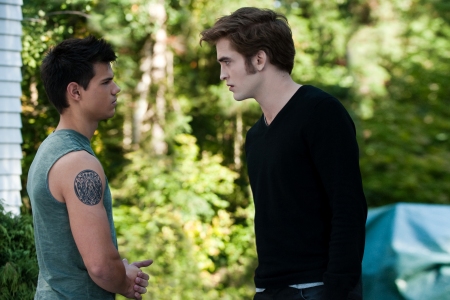 SheKnows: You and Kristen Stewart bring so much to any film you’re working on, how does your process differ when preparing for Eclipse and frankly, the entire Twilight Saga?

Robert Pattinson: For some reason, I can’t understand anything and I think I’m going really into the depth of the character, when it just seems so obvious to Kristen. Her mind works completely differently. She can just feel things immediately, and I like to be more cerebral about things, in completely the opposite way of Kristen. I don’t feel confident unless I know more about the reasons why I’m doing things. I don’t really do that for other parts. That’s what I do for Edward.

SheKnows: Do you two understand why there is an obsession about whether or not you and Kristen Stewart are dating in real life?

Robert Pattinson: No, not really. Well, I guess people like stories. My basic conclusion is that they just want everything to be about Twilight. 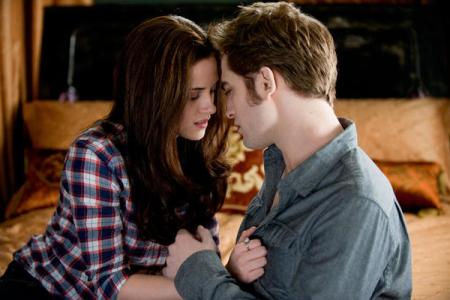 SheKnows: You were on the first soundtrack and when we spoke for the first Twilight, you felt you could no longer go and do amateur music nights. Have you been able to play much anymore and will we see you on the Breaking Dawn soundtrack?

Robert Pattinson: I’ve done a couple of things. I’ve always just been playing around. It was nice to be involved in the first one. I just saw Twilight on TV, for the first time, a few days ago, and when my song came on, I was just thinking that is so bizarre that I actually had a song in the movie. I’m amazed Catherine [Hardwicke] did. It really shows how none of us thought it was going to be so massive. I never thought people would buy the soundtrack. So, it’s a little more nerve-wracking now. I don’t know. Maybe.

Up next…Robert Pattinson dishes his new haircut and the battle between Edward and Jacob!