At a time when flash floods and oil spills are decimating lives, environments and infrastructure, people are worried about Sarah Palin’s boobs. Did Sarah Palin get breast implants? Do we care? 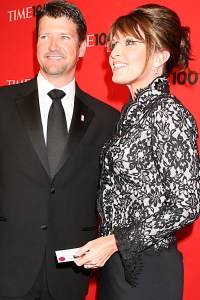 Sarah Palin is enough of a boob without anyone getting into a debate about her cup size.

After the Belmont Stakes on June 6, the blogosphere exploded with reports that the former Republican vice-presidential candidate was looking even more overblown than usual.

The gossip blog Wonkette picked up a tip on their Facebook group and then reported, “Having just now checked our tipster’s hunch with another woman, we can report with confidence that at least two people with experience in having breasts say that Sarah Palin sure looks like she was trotting out some new work at the horse races on Sunday.”

Columnist Lauren Beckham Flacone of the Boston Herald also commented on the alleged enhancement, writing, “Hey Sarah Palin, I can see your cleavage from my house.”

Shooting down the “boob-gate” rumors, Sarah Palin took to Fox News, telling Greta Van Susteren that she has not had implants and the reports were merely the work of “bored, idle bloggers and reporters with nothing else to talk about.”

“No. I have not had implants,” Sarah Palin said in the interview. “I can’t believe we are even talking about this. To be judged on or to be talked about on appearance — say chest size — it makes me wear layers, it makes me have to waste time figuring out what am I going to wear so that nobody will look at an area that I don’t need them to look at.”

Sarah Palin seemed a tad uncomfortable about the entire topic. “I want them to hear what it is that I’m saying. It just ends up wasting time and that’s very, very unfortunate. I think some of those folks, too, they need to perhaps grab a shovel, go down to the Gulf, volunteer to help, clean up and save a whale or something,” Palin said.

So why the big fuss over a boob’s boobs? Considering Sarah Palin has almost no political experience, save an aborted term as Alaska’s governor, her breasts seem like a perfectly logical point of discussion as she continues her hunt for media attention in order to remain relevant until her expected 2012 presidential run, which half the country is fearing and the Tea Partiers are cheering.

Read on for more Sarah Palin