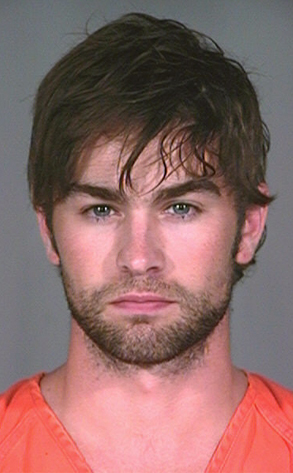 Chace Crawford was busted in the parking lot of a bar in his hometown of Plano, Texas with less than two ounces of pot: A single, unlit joint. In most jurisdictions, police would merely confiscate the contraband and issue a stern warning.

Chace Crawford was not so lucky.

Cops hauled him down to the station, put him in a lovely orange jumpsuit and gave Crawford a fab photo shoot, resulting in this beautiful mugshot. Pretty boy didn’t spend much time behind bars, though — police sources say he was sprung around 1 am that morning.

But Crawford isn’t off scot-free. In fact, it is now up to the Plano, Texas district attorney to determine the actor’s fate.

“The case has been referred to prosecutors, and they will determine whether they have enough evidence to pursue charges against him,” a police spokesman told E! News.

The maximum penalty for a conviction in this case is six months in jail and a $2000 fine, but a more likely outcome would be a smaller fine and some drug education classes. Hope his attendance is better than Lindsay Lohan’s.