True Blood arrives June 13 as the third season of the HBO vampire series premieres! The details are hush-hush, but the True Blood cast and crew did give away a few teasers. 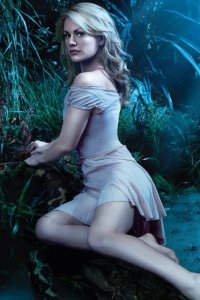 “Season three is [about] identity and sex and blood and rock and roll,” creator Alan Ball previewed. “Every character on the show is struggling with some sort of identity issue: What am I? Who am I? What am I capable of doing? What are the parts of me that I’ve tried to bury that are coming to the surface?”

“Toward the end of the season, we will find out exactly what Sookie is,” he added.

When we were last in Bon Temps ten months ago, Maryann was finally taken down and all looked to be back on track, but True Blood couldn’t end on that note! By the time the finale credits rolled, Sookie’s vampire lover Bill (Stephen Moyer) had been captured and restrained with a silver chain and poor Eggs had been shot.

With Sookie searching for Bill, the love triangle with Eric (Alexander Skarsgard) is set to heat up this season and the third episode will bring a brand new character that could be another potential foil in the Sookie-Bill love story.

It seems some nasty werewolves are behind Bill’s kidnapping so, on Eric’s behest, a new hunky wolf jumps in to serve as Sookie’s bodyguard. Alcide Herveaux (Joe Manganiello) will protect Sookie (Anna Paquin) as she searches for MIA Bill among his kind.

Bill’s absence is going to wear on young vamp Jessica, who never finished learning the ropes. 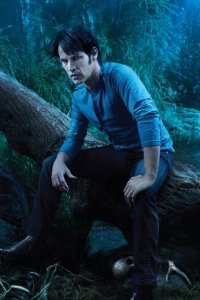 “There’s things about being a vampire that she just doesn’t know,” Alan Ball said. “Bill didn’t get a chance to tell her before he got kidnapped, so she’s making a lot of mistakes.”

Meanwhile, the True Blood premiere will shed light on how Egg’s shooting will affect Jason and Deputy Andy, not to mention Tara.

The toughie is struggling to get over her first love and word is new vampire Franklin (James Frain) may help her heal her broken heart. That said, it will be a very rough first few episodes for her.

“She’s a little unstable right now,” Rutina Wesley (Tara) previewed. “We’re seeing her vulnerability come out, and a lot of her insecurities. This season, it’s going to be interesting to see her journey as she tries to find herself and her feat, so to speak.”

Shape shifter Sam’s parents will also come into play in the third season of True Blood. Also, Melinda (J Smith-Cameron) and Joe (Cooper Huckabee) are “big trouble” and the couple also seems to have another son, Tommy (Marshall Altman).

“There are a lot of surprising things for Sam with (his parents),” Sam Trammell (Sam) teased. “He thinks he gets them at the beginning, thinks he can go meet them, get a feel for them and leave, but that doesn’t work out. There are some big twists that are very disturbing.”

Others set to join the cast this season are Kevin Alejandro (Jesus), Denis O’Hare (Russell), Lindsay Pulsipher (Crystal), Grant Bowler (Cooter), Brit Morgan (Debbie) and Theo Alexander (Talbot). A few of them are sure to be members of the evil clan of werewolves, but maybe not all of them.

“There are creatures besides werewolves that we will meet,” Alan Ball added. “Somebody’s going to take their clothes off and we’re going to see a little dark side from some of our characters who we don’t expect it from, including Miss Stackhouse.”

The season three premiere of True Blood airs this Sunday, June 13 at 9 pm on HBO.

get to know True Blood in under five minutes