Christina Aguilera opens up as she never has before on her Behind the Music episode premiering June 13 at 9 pm on VH1. Aguilera tells fans and the international audience watching at home about some deeply personal struggles and how she has emerged as a true Fighter!

“My mother, I remember, being in such a helpless situation, and I remember just seeing her being overpowered constantly by my father,” Christina Aguilera said of her father’s abusive nature. “And it really didn’t sit well with me.” 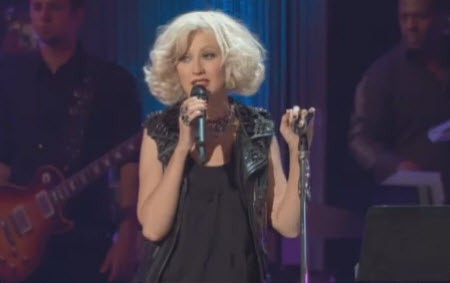 Christina Aguilera was also the target of her father’s abuse and its effects are still felt today by the multiple Grammy-winner.

“I decided to step in between and said: “Don’t hurt my mommy.” He then threw me across the room because I had stood up for my mom,” Aguilera said. “He was getting more physical with me, the older I got, and my mom said enough was enough.”

Surviving an abusive childhood is a mark of honor, she shared, showing how strong her perseverance is to overcome the biggest obstacles in life. Even with the abuse in her home, she never wavered from pursuing her dream of becoming a singer. Christina Aguilera began singing at the age of six and within years of deciding on her life goal, she landed the role on the newly revived Mickey Mouse Club alongside Britney Spears and Justin Timberlake.

Christina Aguilera details how she tried to define herself after those Mickey Mouse Club days and the power that her abusive upbringing had over her in navigating the treacherous waters of the music business.

She details that the song Beautiful, written by Linda Perry, came along at a perfect time in her life. Christina Aguilera was depressed and still reeling from her abusive childhood and the controlling men that were trying to mold her career. “It was very driven by the label. What I was going to wear, the makeup, everything was under the control of the label and what they wanted to be the perfect package of what was happening in pop,” Aguilera said.

Christina Aguilera on her depression

But she overcame her depression and emerged a healthier person remembering that she was not alone in her childhood abuse experience. “I’m not the only person that’s been through growing up in a place of chaos or sadness or yelling and fighting and seeing horrific things at a young age,” she said. “I do battle with depression. It’s something that is always right below the surface. And it’s almost seductive to go to a place of sadness and darkness. It can be overload to feel all of your pain from the time you were six, on.”
Above it all, Christina Aguilera knows she is the person she is today because of having triumphed over her tragedies. “I’m truly thankful for the darkest times in my life,” she said.

Christina Aguilera on the healing power of love

Now that she has found love and welcomed a child into her life, she recalled how much husband Jordan Bratman has influenced her success, both emotionally and professionally.
“My Jordan, he came to me at a time in my life when everything seemed a bit blurry,” she said. “I just remember happiness and relief and joy like I’ve never felt before and holding him for the first time was truly incredible.”

Don’t miss Christina Aguilera’s Behind the Music, airing June 13 at 9 pm on VH1. For a sneak peek — check out this video!

Christina Aguilera: Behind the Music