Emily Giffin is glowing and who could blame her. Giffin’s latest book, Heart of the Matter, has debuted at number two and her first novel, Something Borrowed, is currently being filmed with Kate Hudson and Ginnifer Goodwin. 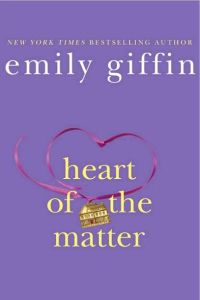 Emily Giffin is a New York Times bestselling author, but she is also a mother of three as well as an accomplished attorney in her previous career.

Life as a lawyer was not what she dreamed of doing, so Giffin left the profession to pursue her dream as a novelist.

Her time as a New York City attorney accomplished several things — a move to Manhattan which she said she never would have had the courage to do on her own, and then her realization that the career path was not one she desired. She quit her job and moved to London, giving herself one year to write a book. Something Borrowed is what followed and the rest is history.

Emily Giffin’s other books include Something Blue, Love the One You’re With and Baby Proof. She lies at number two currently on the New York Times bestseller list with Heart of the Matter, but Emily Giffin is number one in our book.

The author was positively glowing about her selection as the SheKnows Book Club book of the month with Heart of the Matter. When Emily Giffin swung by the SheKnows Entertainment headquarters in Los Angeles for an insightful visit with the queen of fiction for the new millennia, we found her courageous and compelling.