It’s been a messy scene since Gary Coleman was taken off life support and passed away. Now, Gary Coleman’s live-in ex-wife Shannon Price has allegedly sold deathbed photos for $10,000. Whoever sold the images, they take Coleman’s tragic end to a whole new level. 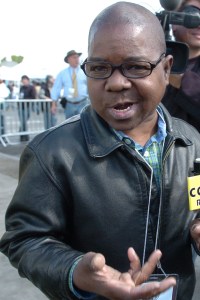 Gary Coleman died on May 28 after suffering a brain hemorrhage from an at-home fall and then being taken off life support by his ex-wife, Shannon Price. The untimely death has since set off a stream of controversy.

Most recently, disturbing Gary Coleman deathbed photos hit stands June 9 and reports pin his live-in ex-wife Shannon Price as behind the sale — though she claims the shots “were never meant to get out.”

In an interesting move, TMZ reported on the photos, but showed restraint in actually publishing them.

“We’ve seen one of the photos and declined to even look at the rest,” TMZ revealed. “In the pic, Gary is in the hospital, his eyes are closed and he is hooked up to a ventilation machine. It is not a pleasant sight.”

The Globe, however, had no qualms about running the tasteless images: In the cover shot of Wednesday’s issue, Price is posing next to Coleman, who looks just as TMZ described. One of the taglines read, “I didn’t push him!”

Gary Coleman has remained in the news since his passing, with the star’s estranged parents, former manager and ex-wife feuding over just about everything, including the rights to Coleman’s body.

Coleman and Price divorced in 2008, but were living together in Utah at the time of his accident, while Gary Coleman’s parents, Willie and Sue Coleman, hadn’t spoken to their son in decades.

In addition to being heartbroken at not being called to their son’s side before he was taken off life support, the pair has voiced suspicions about the accident. Then they backtracked.

“We’re not angry,” Sue Coleman told People. “We’re just concerned. Did our son fall down the stairs? Did he fall in the bathtub? We need to have some closure on our son’s life.”

Now, with Coleman’s former manager and appointed executor of the estate, Dion Mial, having entered the fray, the fight for his body is set to go to court.

Unlike Coleman’s parents, Mial’s not backtracking about his suspicions or distaste for Price. “I wholeheartedly believe there was foul play here,” Mial maintained. “There has been absolutely nothing covert about her behavior and how sadly she has handled this situation. In fact, she’s shamelessly brazen and coldly matter-of-fact about this precious life that we’ve lost.”

Coleman must have seen this drama coming, considering his will asks that his funeral be “conducted by those who have had no financial ties to me and can look each other in the eyes and say they really cared personally for Gary Coleman.”

Price has now been barred from entering her ex’s home, but according to Mial, whether or not she sold the pics for $10,000, she’s already made off with a great deal of booty since Gary Coleman passed.

“These items include, but are not limited to, numerous televisions and video game systems, a black 2005 Dodge pick-up truck, cargo trailer, model train sets, computers, telephones, musical instruments, and furnishings,” Mial said. “It is our hope that Miss Price should immediately and respectfully comply with the court’s order, so as to avoid the filing of criminal charges against her.”

Price has countered that her desperation for money stems from the legal quagmire Mial created and also insists Coleman would have wanted her looked after.

While many are scoffing with disgust over the photos, The Globe issue sold well, just as the OK! issue featuring Michael Jackson being taken to the hospital did. We all remember how the tasteless pics of Anna Nicole Smith swept the Internet, but this isn’t a new trend. Word is the National Enquirer has never topped the sales of their issue featuring Elvis in his casket.

What’s your take on the Gary Coleman deathbed pics? Leave a comment and weigh in.

Read on for more Gary Coleman