Shawn Southwick, wife of Larry King, has been hospitalized after a drug overdose police are calling a suicide attempt. 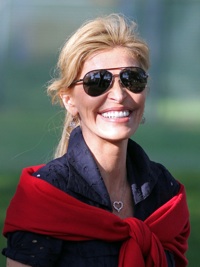 A 911 call was placed from the couple’s Utah home by Shawn’s father, who told the operator, “I can’t wake her up… She may have overmedicated. I don’t think she did it on purpose. Last night she seemed confused about what she had taken, the last time she had taken it.”

“She’s unconscious. I slap her and she opens her eyes half way and puts them back down again,” he said. “I left my daughter here last night and she was fine. I come this morning, she’s supposed to have a meeting in a while and she just seems to be out of it.”

“No, no. No, it wouldn’t be suicidal,” he assured the operator.

But cops say Shawn Southwick left a handwritten note which stated she overdosed on purpose and indicated where she wants to be buried — Provo, Utah to be exact.

Emergency workers found eight bottles of pills at Shawn’s bedside, including Compro, Prometrium, Clonazepam, Ambien, Klonopin, Subutex, Cymbalta and Lyrica. What do all those pills do? Compro is for severe nausea and vomiting, Prometrium is a progestin replacement used during menopause, Klonopin and Clonazepam are anti-anxiety meds, Subutex is used to treat narcotic addiction, Lyrica is for treating seizures and Cymbalta is an anti-depressant. Ambien is a heavy-duty sleep aid.

Despite the fact that the prescriptions had only been filled ten days ago, the bottles of Ambien, Klonopin and Clonazepam were empty.

Larry King says that the couple’s marriage is intact, despite coming this close to divorcing in April amidst Shawn’s accusations that Larry was cheating with her sister.