Les Grossman has performed with Jennifer Lopez, scared the dirt back into Robert Pattinson’s hair and now he’s got a movie about his life in the works from Paramount. Is there anything Tom Cruise’s Les Grossman can’t turn to gold?

Les Grossman, played by Tom Cruise, is once again making headlines — but this time it’s not for his funky-fresh dance moves at the 2010 MTV Movie Awards. Paramount Pictures and MTV Films announced June 9, Les Grossman will be the subject of a currently untitled film to be penned by Michael Bacall. The statement was delivered with the foul-mouthed movie exec’s spirit in mind. 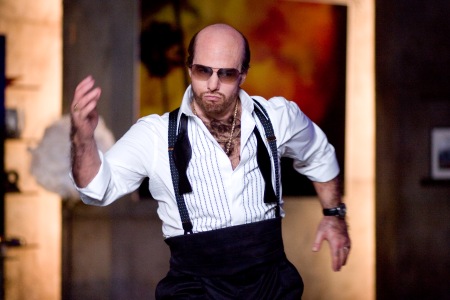 “Les Grossman’s life story is an inspiring tale of the classic human struggle to achieve greatness against all odds. He has assured me he plans to, quote: “Make Citizen (expletive) Kane look like a piece of crap home movie by the time we are done.” I am honored to be working with him,” one of the film’s producers, Ben Stiller, explained.

Yes, you heard right Tropic Thunder fans. Ben Stiller, the funnyman who created the foul-mouthed Les Grossman, will team up to produce the film alongside Cruise and Stuart Cornfeld.

Grossman himself issued a statement to shed some light on the film’s subject matter: “To quote my great friend Kirk Lazarus: I don’t read the script, the script reads me.”

Closing out the spoofed statement, Paramount Film Group President Adam Goodman added, “Everything I learned in this business, I’ve learned from Les. I started out as his assistant, and from the first day he threw his desk at me when I got his lunch order wrong, I have loved him like a father.”

Check out Cruise in the action-comedy Knight and Day opening June 23 and Mission: Impossible IV, which blasts into theaters in May of 2011.

Read on for more Tom Cruise