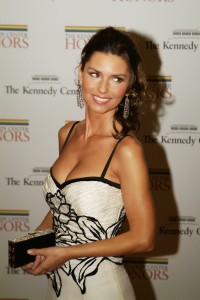 The Shania Twain and Mutt Lange love affair started when successful rock record producer Mutt Lange heard Shania Twain’s music and tracked the crooner down for what turned into a marathon phone call.

Twain and Lange tied the knot in 1993 only six months after meeting, and went on to spend 14 years as husband and wife. They also had a son, Eja D’Angelo, 8.

As country songs are wont to do, however, this one took a heartbreaking turn two years ago. In 2008, the gorgeous star was crushed to learn her husband was having an affair with Marie-Anne Thiebaud, one of her BFFs and the manager of their Swiss chateau.

Twain, who has been busy promoting her upcoming OWN (Oprah Winfrey Network) series Why Not? With Shania Twain, recently revealed she still hasn’t yet recovered from the shocking turn. In fact, the new show for Oprah’s network will follow Twain’s efforts to emerge from a “dark slump” resulting from the double betrayal.

“I feel like in a way I’m starting over, with everything,” Shania Twain told Winfrey in April. “This is a very personal experience that I think is important to share. This is an experience of recovery. I was in a very deep, dark slump, and I needed to find a way to get myself out of it. I had to force myself back out into life, back out into experiencing things.”

Twain has found an interesting companion in her struggle. She’s been spotted all over the globe with Frederic Thiebaud, her ex’s mistress’s abandoned ex-husband — say that ten times fast! Twain was at first coy about their romance, but finally went on the record, confirming they’re a couple.

Most recently Shania Twain and Frederic Thiebaud were seen mooning over each other and dancing at the Swiss Red Cross Ball on May 29 and folks at the event were thrilled to gloat on behalf of the officially “single” Twain and her “new” man.

“Her happiness certainly shone through,” her pal Stephane Lagonico told People. “They are a great addition to each other’s lives.”

“Shania and Fred are a couple that fit together,” an unnamed source adds. “Things are getting really serious.”

After the breakup, Shania Twain spent some time out of the spotlight, but the sexy divorcee has certainly jumped back in with both feet, professionally. In addition to landing her new show, Why Not? With Shania Twain, Twain has also served as a mentor on American Idol and inside sources believe that American Idol has an eye on Twain to fill Simon Cowell’s abandoned judge’s chair.

SheKnows is thrilled to see Shania Twain back in the game.

Read on for more Shania Twain