Glee came full circle in a show-stopping Glee season finale! Quinn went into labor, Finn said those three little words, Mr Schuester and Sue Sylvester found common ground and they did it all while Glee took on Journey.

Knowing glee club was over if they didn’t win regionals, Mr Schuester (Matthew Morrison) tried to boost morale by reminding the group how far they had come in a Glee season finale fittingly titled, Journey. 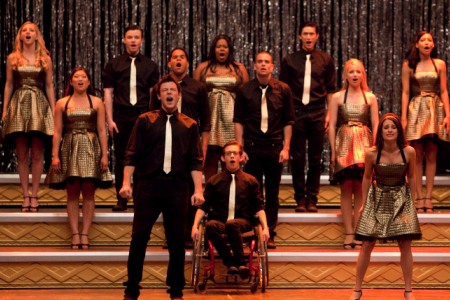 With a Journey medley up their sleeves, Mr Schuester’s New Directions set out for regionals to take on their rivals Vocal Adrenaline and — Olivia Newton-John? No, you didn’t hear wrong. Olivia Newton-John and Josh Groban made appearances at the contest as celebrity judges with hysterically larger than life egos. Throw in the sensational Sue Sylvester (Jane Lynch) and you have a disaster panel waiting to happen.

In Glee romantic news, it was the “Gleek” moment heard around the world. That’s right; Finn (Cory Monteith) told Rachel (Lea Michele) he loved her. The two had a moment with Journey’s Faithfully and led the rest of the group through Any Way You Want It, Lovin’, Touchin’, Squeezin’, and finally, the full circle moment, Don’t Stop Believing. That song was originally sung in the pilot!

The uh-oh moment of the Glee finale was when Quinn’s (Dianna Agron) estranged mother showed up at the competition just in time to see her teenage daughter go into labor. The glee glub, including mom, rallied behind the former cheerleader at the hospital. Perhaps the most creative moment of the show came during the delivery scene, which was intertwined with Vocal Adrenaline’s performance of Bohemian Rhapsody.

The drama of the song combined with Quinn and Puck’s (Mark Salling) agony was genius.

Meanwhile, in other mother news, Rachel tried to make one last attempt at a relationship with her mother Shelby (Idina Menzel). The Vocal Adrenaline coach surprised her daughter by announcing she wanted to start fresh and have a life beyond teaching glee club at the rival school and that didn’t include Rachel.

In the judges’ room, Sue and the others argued over who should win, but after a tirade from Olivia Newton-John about how bad the kids sucked, Sue actually defended New Directions. In the end, Vocal Adrenaline won and Mr Schuester packed up his office. 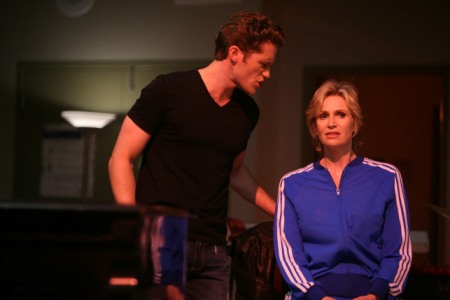 Did you really think it would end there? After seeing the kids pay tribute to her nemesis, Sue had a change of heart and convinced the school’s principal to give the optimistic glee club teacher one more year to make winners out of the glee club. Mr Schuester ended the season with a great rendition of Somewhere Over the Rainbow, with the kids looking on. Fans also got to see one last surprise as Rachel’s very own mother adopted Quinn’s baby.

Glee will be in production on Season 2 by mid-July and has already been picked up for Season 3. We can hardly wait!