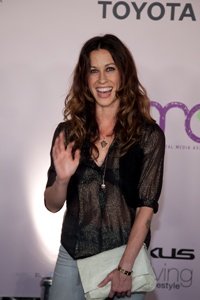 “Hi guys! So happy to share with you that my man Souleye and I got married. We’re very excited to embark on this journey with each other,” Morissette tweeted yesterday and her new hubby re-tweeted the message.

The hush-hush, intimate affair was held in their Los Angeles home, with family in attendance, according to a People mag source.

Morissette, 36, and Souleye, 30, were first spotted together in October of last year and already lived together when they tied the knot.

Just days before the wedding, on May 18, Morissette’s busty but flowing gown at the Prince of Persia premiere had folks talking. Perez Hilton, in particular, posted the rumor that Morissette and Souleye are expecting a baby.

Morissette was previously engaged to fellow Canadian Ryan Reynolds, who she started dating in 2002. The pair split in 2006 and he’s since gotten hitched to Scarlett Johansson.

The songstress also dated Full House alum Dave Coulier, who is rumored to have inspired her breakout hit You Oughta Know. Morissette never confessed to who the song is about, however, so it’s also possible the diatribe is about former beaus like New Jersey Devils hockey star Mike Peluso, Friends alum Matt LeBlanc or her former producer Leslie Howe.

Whomever it’s about, Morissette is long past having swallowed that Jagged Little Pill that made her an international star. Now, she’s hitched to a Massachusetts-born rapper, MC and activist who has said he’s “on a spiritual path with my music.” Seems like a better fit for the socially conscious songbird!

SheKnows sends congrats and good luck to the newlyweds.