More than a few tears were shed and Chris Harrison announced there would be two individual dates and one group date. If a guy didn’t receive a rose on the date, he’d be sent home immediately. 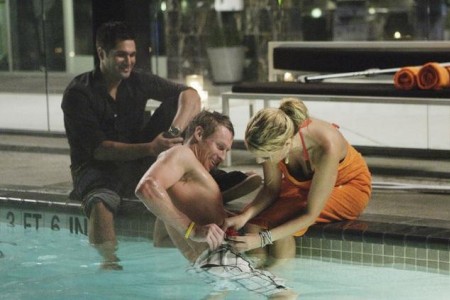 Are they seriously trying to punish Ali Fedotowsky? The blonde Bachelorette cutie is afraid of heights, yet they sent her on a one-on-one date with the handsome Roberto that took heights to a new meaning. The two, who are obviously into each other, walked across a tightrope placed across two skyscrapers! Perfect opportunity for Ali to grip onto the strong Latino! The couple then shared a romantic dinner and steamy kiss that made him safe for the night.

During the group date, Bachelorette Ali Fedotowsky chose Kirk, John C, Chris N, Frank, Jonathan, Craig, Justin, Jesse and Chris L to take part in a Barenaked Ladies video shoot for their new single, You Run Away. Weatherman Jonathan proved his awkwardness once again (think back to the Speedo episode), setting him up for some prime teasing from the other fellows.

The pressure of a staged kiss during the shoot was too much for Jonathan to handle and the poor guy freaked out. Ali being, well Ali, showed the guy some mercy after numerous failed attempts to get the passion flowing. She planted one on Jonathan that made the other bachelors take notice. 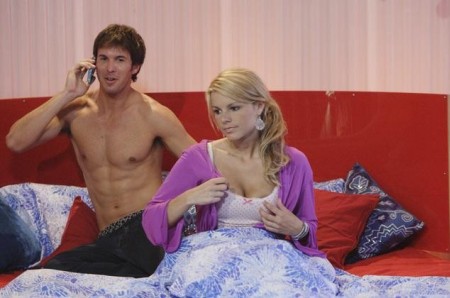 On the flip side, Frank couldn’t control his emotions, making a big deal over Ali kissing other guys. Seriously, Frank, you knew what you were getting into when you signed up for the show! The sexiest moment of the group date goes to Kirk, who got to heat it up in bed with Ali. Of course, this won him a rose.

Ah, poor chemistry-lacking Hunter was awarded a one-on-one date. In the end he fizzled and Ali sent him and his lackluster passion home.

A professional wrestler always takes charge. Feeling he hadn’t had enough quality time, Justin took matters into his own hands and took the 3-mile walk to surprise Ali with a date. Ali obliged and the two enjoyed a few moments together.

Let’s talk about who didn’t get roses. With Hunter out of the mix and Kirk and Roberto already holding roses, Chris L, Jesse, Chris N, Ty, Kasey, Craig, Frank, Jonathan, and Justin were the night’s lucky guys moving on. John and Steve were sent packing.

Many feel Roberto’s chemistry with Bachelorette Ali will leave him in the finale and Justin seems to be this year’s villain with ulterior motives. Whatever the case, the remaining guys will start flying around the world with Ali during the start of next week’s episode.

Read on for more Bachelorette Ali