Eclipse star Kristen Stewart went on the record about the price of fame, comparing paparazzi attacks to rape. After a backlash over her choice of words, Stewart has apologized. 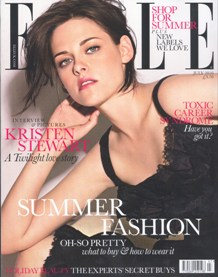 Stewart speaks candidly in the July cover story of British Elle, sharing her paparazzi fueled frustration. The Twilight heroine, who also stars in the upcoming On the Road, spoke of her annoyance with the media fixation on her and costar Robert Pattinson’s dating status, as well as the general paparazzi scene.

“What you don’t see are the cameras shoved in my face and the bizarre intrusive questions being asked, or the people falling over themselves, screaming and taunting to get a reaction,” Kristen Stewart said in the interview. “All you see is an actor or a celebrity lit up by a flash.

“The photos are so, I feel like I’m looking at someone being raped. A lot of the time I can’t handle it. It’s (expletive). I never expected that this would be my life.

“Your little persona is made up of all the places that people have seen you and what has been said about you,” Stewart also said. “And usually the places that I am are so overwhelming in the moment and fleeting for me — like one second where I’ve said something stupid, that’s me, forever.”

This time, that “something stupid” came out during what we can only assume was a calm, scheduled chat with a reporter. The quotes hit the net last week and an uproar ensued over her use of the word “rape.” Stewart’s apology was just in time for the 2010 MTV Movie Awards and interestingly, she did not walk the red carpet!

“Rape is a violation in which one has no choice,” RapeIs.org executive director Margaret Lazarus explained to Fox News. “A star seeking publicity has choices. Although rape involves loss of privacy, loss of privacy does not constitute rape. Let’s use a little logical thinking here.”

“Kristen Stewart’s comments are regrettable,” added America’s Rape and Incest National Network charity spokesperson Katherine Hull. “Portraying a rape survivor in the film Speak should have led her to use a more appropriate metaphor to describe the intrusive nature of the paparazzi. Rape is more than an intrusion; it’s a violent crime that causes serious long term mental health effects for victims.”

Two days after the backlash broke, Kristen Stewart, who has done PSAs for the rape advocacy groups RAINN and SOC, has gone on the record with an apology.

“I really made an enormous mistake — clearly and obviously,” Stewart told People. “And I’m really sorry about my choice of words. I’ve made stupid remarks before, and I’ve always reasoned: Whatever. They can think what they want.”

This time, however, she feels bad about the faux pas, acknowledging that “violated” would have been a better choice of words.

“People thinking that I’m insensitive about this subject rips my guts out,” Stewart admitted. “I made a big mistake.”

SheKnows certainly empathizes with Stewart’s situation and frustration. The paparazzi often create mad, ugly scenes, with Princess Diana being the ultimate example of the price celebs can pay.

While it’s hard to believe any young actor in this day and age could be naive enough to not know what he or she was getting into by becoming a celeb, that doesn’t make the mayhem right.

As for her use of the term “rape,” we all choose the wrong words on occasion. The difference is no one is recording most of us! In the end, all we can do when we slip is apologize, so good on Stewart for doing so.

On a side note, she and costars Robert Pattinson and Taylor Lautner won’t be attending the London premiere of The Twilight Saga: Eclipse on July 1. Ashley Greene, Kellan Lutz and Nikki Reed will be on hand, but fans that turn out will only get to see a video of the saga’s three central stars.

No reason has been given, but it bares mention that the British press and paparazzi are known to be even tougher on stars than here in the US.