Russell Brand is Aldous Snow, the rock star audiences should remember from his scene-stealing turn in Forgetting Sarah Marshall. 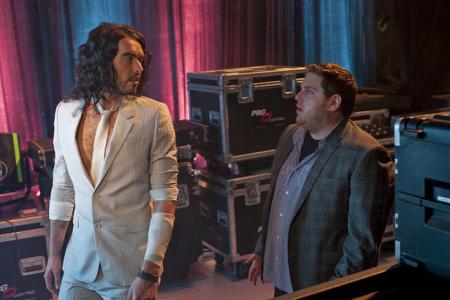 In Get Him to the Greek, Brand’s character gets the full spotlight and the audience is the big winner. Brand is hysterical and simultaneously sensitive as a rock star at a turning point in his life. Jonah Hill’s Aaron presents him with an opportunity to revive his sagging career. Aaron, a record company executive, is charged by P Diddy’s label owner to get Brand’s rock star from London to the Greek Theatre for an anniversary concert in 72 hours.

Hill and Brand are a perfect team as they navigate the speed bumps in front of them on their way to Los Angeles. First, Hill has to convince rocker Brand to even make the trip. What ensues is a hilarious comic tale that continues Hill’s streak of killer comedy performances after Superbad, Forgetting Sarah Marshall and 40-Year-Old Virgin.

What also makes Get Him to the Greek work is the supporting cast. Most notably, Rose Byrne and Mad Men‘s Elisabeth Moss as romantic interests are terrific. Byrne and Brand make sweet comic music together, particularly in the improv-heavy entertainment news interview scene. Moss and Hill meanwhile, are a truly believable couple who are seeking different things out of life, yet still want to move toward the future together.

In one simple phrase: Get yourself to the Greek!

Get Him to the Greek review: Out of five stars

Get Him to the Greek cast chats
Marmaduke review
Killers review