When we last caught up with Laura Bell Bundy, she was readying her debut album, Achin’ and Shakin.’ After achieving a lifelong dream of crafting a country album on her own terms, Bundy was flying. Our first meeting with the show-stopping performer was at the 2008 MTV Movie Awards as she was leaving her Tony-nominated Legally Blonde: The Musical. 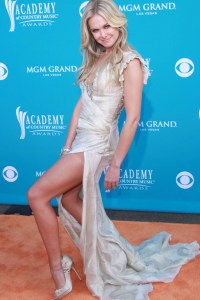 How much has changed for Bundy? Since Achin’ and Shakin’ debuted and produced the hit singles Giddy on Up and Drop On By, Bundy finds herself honored as a two-time nominee for the CMT Awards. Fans can vote at CMT.com for Bundy and help the talented performer win her first CMT Award!

Back in April, Bundy triumphed on the stage at the Country Music Awards and look for Bundy to become an award-winner at the upcoming CMT Awards with your help!

In honor of Bundy’s CMT nominations and the two-year anniversary of the day we first met Laura Bell at the 2008 MTV Movie Awards (The 2010 MTV Movie Awards are June 6), SheKnows revisited with our favorite country crooner for a fun, yet serious discussion about the plight of Nashville as it recovers from terrible floods.

SheKnows: Congratulations on the CMT Award nominations. Now, I know you had the pleasure of announcing the nominations, how did that work when you looked at the teleprompter and saw your name coming as a nominee?

Laura Bell Bundy: [Laughs] Evan (Farmer), who does the top 20 at CMT — it’s so funny, I was looking at the teleprompter and I was reading his lines too. I saw my name come up and I got excited. But, then I’m not supposed to have seen that already. It was awesome. I was very excited.

SheKnows: At the last country music awards ceremony, the CMAs, you performed. Were you at all nervous to perform considering the journey you’ve been on from Broadway belle to country crooner?

Laura Bell Bundy: It was a dream come true. I was definitely nervous. I was excited and nervous. And at one point, I wanted to get the nerves over with. It’s that feeling that when you do it, you are in front of all your peers doing something different. I had to figure out new ways to breathe while singing and dancing — that was a challenge. Other than that, that’s the kind of thing you want to do, and then you want to immediately do it again so you can do it without any nerves. When I first started the song I was so nervous, then I just surrendered to performing the song and enjoying the time. I thought about my family watching on television in Kentucky. Then, I just thought, “Just have fun. You’re doing this for them.” I think I really started having fun about a minute into it [laughs]. 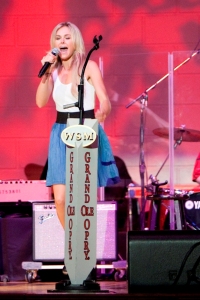 SheKnows: Last time we spoke the album was about to come out. How has it been getting out there and what has been your fans’ reactions?

Laura Bell Bundy: Right now, I’m starting to have more live performances. That allows me to meet more fans and people in general. That’s my favorite part, being out in the trenches meeting people. The sales are doing well, it’s one of those things that you have to keep plugging away. You can’t take anything for granted.

SheKnows: Well, you got the second single out there now.

SheKnows: The first video for Giddy on Up, looked like it was such a blast. Is making videos an enjoyable part of this whole process for you?

Laura Bell Bundy: I love it. In fact, I think I’d love to direct my videos at some point — and other people’s. I love telling stories with music. Telling stories through music is a true passion for me whether live on stage, filming a video or sitting down and writing a song, I love it!

SheKnows: Has anyone in the industry, since the album’s come out, come up to you and said they like your work that honestly surprised you?

Laura Bell Bundy: Blake Shelton, on Twitter, he has literally been tweeting about my album every day. I actually hung out with him and Miranda Lambert last night and the two of them have been extremely supportive, and also Taylor Swift [laughs]. All of those compliments have been surprising to me and delightful. I’m a huge fan of Miranda’s and Blake’s and have been for years. It is very flattering to have them like the album and they’re singing songs from it live [laughs]!

SheKnows: Knowing that you had the dream of a country music record and now to have so many people appreciate your work, have you been inspired to start writing songs for the next record?

Laura Bell Bundy: I’m writing songs for the next album. My head is already there in terms of what’s next. I’m working on creating even more of a concept for that one. I also have about 35 songs from last year and I only put 12 on my record. I have a lot left over to choose from. We just had too many songs.

SheKnows: As a songwriter, you put yourself out there as no one else, has that always been an easy task?

Laura Bell Bundy: It’s always a challenge to be truthful and honest about things that you don’t want other people to know. My philosophy on songwriting is that if you’re afraid to say it, someone probably needs to hear it and it probably makes a good song. 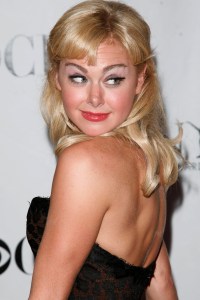 SheKnows: As the awards near, have you been approached about a dress? Do you know what you’re going to wear?

Laura Bell Bundy: I don’t know [laughs]. I want to wear something sassy. I love the vintage, throw-back look. I’m going to go for something like that.

SheKnows: I know Nashville has had a rough go these last weeks since the flood. What has it been like in the country music industry, and also in the community of Nashville as a whole?

Laura Bell Bundy: It’s raining right now again! Honestly, it took everybody by surprise. Rain like that had not been seen here in 80 years — people’s lifetimes. Homes were completely under water, almost everybody that I know that has a basement, their basement was flooded. This Soundcheck, where everyone stores their gear and rehearses, was completely underwater. So many artists lost all their gear. Everything was just gone. It’s been devastating — people lost loved ones and pets have been misplaced. I think it was shocking for everybody. However, this is an amazing city in regards to people’s love and support for one another. I’ve never seen anything like it. The country music community and the entire Nashville community as a whole — people have been coming together and helping. Helping Hands of Nashville, in 5 years time, they had the same number of volunteers as they got in a week after the floods. Thousands and thousands of people came out to help people. It’s been incredible how people have come together and how many benefits there are happening.

SheKnows: Do you think the national media did a good job of portraying Nashville’s problems during the flood?

Laura Bell Bundy: I don’t. I think the national media did not cover it properly. Until Anderson Cooper came here, nobody really knew. It was horrible for two days. That Monday, everything was closed. I flew in during the storm. I was on an airplane and I literally thought I was going to die. It was scary. We got in and it was bam — rain, thunder, hail, for 48 hours. By Monday, no one in New York knew about it. People were calling me like business as usual. I was saying, I’m so sorry but because of the floods here…and people didn’t know what I was talking about. No one knew that the whole city was under water.