Killers is set to hit theaters Friday, June 4 and the romantic-action-comedy held its Hollywood premiere on June 1 and SheKnows takes you there live! Stars Katherine Heigl, Ashton Kutcher and Tom Selleck worked the red carpet where the talk was all about the hot Killers action. 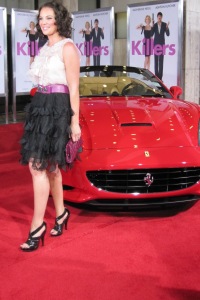 “It’s action. It’s romantic comedy. It’s all that,” star and producer Kutcher promised of his new film. “It’s like Jewel of the Nile, where you could go laugh and there was action too. It’s that movie where you don’t have to feel bad about taking your guy to it. He’ll enjoy it.”

The set up for Killers is that Jen and Spencer fall in love after a chance meeting in Europe and they live happily ever after — until Spencer’s CIA past, which Jen knows nothing about, catches up to them. They suddenly find themselves fighting to save their lives and their marriage.

Rom-com with a twist

“Bring your boyfriend” was certainly the message on the carpet, but Killers is also about the romantic comedy.

“I’m all about romantic comedies and I’ll see every one that comes out, pretty much,” admitted Heigl, who was sporting short, brown curly locks with an Oscar de la Renta number. “The great thing is that this has all those elements, but with a slight twist on the formula.

“The formula tends to be the same and you always know what’s going to happen by the end, but this one has this thing that keeps you along for the ride and intrigued. There’s this whole action vibe, which is fun.”

An all-star cast doesn’t hurt, either! In addition to Heigl and Kutcher, the film features Tom Selleck and Catherine O’Hara as the in-laws, along with Casey Wilson, Rob Riggles, Lisa Ann Walter, Kevin Sussman and more.

Director Robert Luketic told SheKnows about the above actors playing different characters than they’re known for portraying. “With a lot of them, we cast against type. But even though they’re being villains, I wanted them to bring a little of their comedy to it,” he continued. “There was quite a bit of improv. Whenever you put great comedians together, and even Ashton and Katherine, they’re going to go off. They can keep talking til the sun goes down.”

Luketic added that doing another film with Heigl, after The Ugly Truth, was a no-brainer.

“It’s just easy for me because she’s my neighbor. I just go down the street, knock on the door and go: We’ve got another one,” Luketic quipped. “No, seriously, I just love how vibrant and funny she is. She’s accessible and she’s not afraid to burp and scratch her bottom. She’s real.”

Her costars speak just as highly, including both her onscreen gal pals. 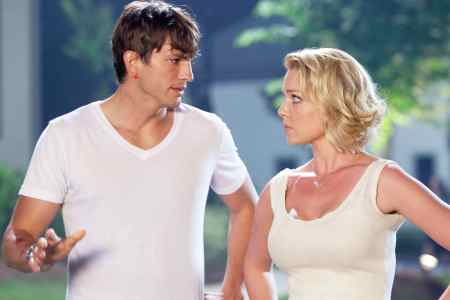 “My character is Katherine Heigl’s best friend, but really more of a frenemy,” Saturday Night Live alum Wilson told us. “She was a dream. She was so nice and included me in a bunch of girls’ outings. She’s funny and smart and would laugh at all my bad jokes, so she’s an “A” in my book!”

“She’s nice,” added LeToya Luckett, who plays Jen’s real best pal. “Everybody asks, “Does she do this? Does she do that?” Honestly, she was one of the best people I’ve ever worked with. Very professional.”

Luketic notes that Kutcher brings a fresh energy to the project, which is nothing like The Ugly Truth.

“Ashton’s much more of a gentleman, whereas Gerard [Butler, Heigl’s love interest in The Ugly Truth] was a ball-busting, beer drinking, ball scratching guy,” Luketic explained. “They’re very different films. This is probably one of the most sensitive sides to Ashton I’ve ever seen.”

Kutcher may show his softer side in Killers, but as a producer, he wanted realistic fight scenes. So when it came time to get in front of the camera as a superspy, he was ready to kick some serious butt. Martial arts pro Katheryn Winnick, who camouflaged her bad-ass abilities with some BCBG style on the red carpet, will attest to that.

“I play a killer named Vivian who ends up beating his butt down,” she told SheKnows. “Ashton was very well-trained in Krav Maga and it was tough, but it was fun. I loved it!”

Kutcher also studied Muay Thai and Kali and worked out with a DVD, but didn’t study any stage fighting, which is why he overdid it in a now infamous fight scene. 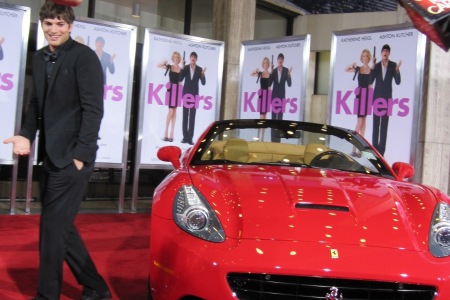 “I was trying to knock this guy out and actually really knocked him out,” Kutcher recounted. “We were on a yacht and it was pitching, because it was wavy. This guy threw a punch at me. I’d only done practical fighting training, so I blocked it and punched the guy and accidentally fell into the punch. I don’t think he expected it. Part of me was feeling really bad, but part of me felt like I just punched out a 225-pound French killer!” Kutcher said and laughed. “You can’t feel awful about that and it’s a great story.”

One action hero that didn’t quite have it down, however, was Heigl.

“I tried,” the Grey’s Anatomy alum said with a laugh. “Thankfully, I wasn’t supposed to be great at that kind of stuff in this film. It works that I look like an idiot, but there were moments when I was trying to look cool and it still didn’t come off.”

SheKnows on the red carpet!

The Killers red carpet featured big stars and a flashy red sports car, but it was relatively mellow, as red carpet scenes go. There were no bleachers for fans and the stars didn’t actually spend much time talking to the press before heading in.

Every one of them did, however, make it over to the live feed, which was broadcasting on Kutcher’s Ustream channel. Fans in the know tuned in to watch the live interviews, followed by the first 13 minutes of the movie.

There were also several fans on hand, carrying signs and screaming for the stars. They got smiles and waves from most, but to the chagrin of his handlers, Kutcher actually went over to sign autographs!

Kutcher, who started The Demi & Ashton Foundation (DNA) with wife Demi Moore, also used his time on the carpet to call People magazine out, daring them to run his quotes on sex trafficking. We’ll see if those show up in the gossip rag!

In the meantime, SheKnows presents our video of Kutcher on the red carpet. Stay tuned for Heigl!

Read on for more Killers