Radar broke the story that there’s another Kardashian on the way, but the Kardashian clan and Lamar Odom aren’t speaking. 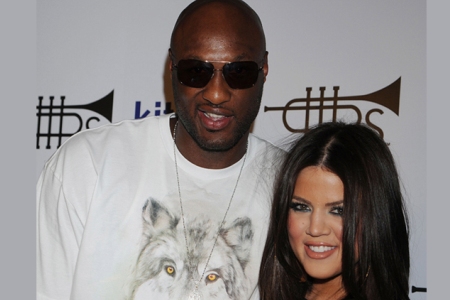 “Khloe was inspired by Kourtney having a baby,” the inside source said. “Lamar is happy and ecstatic.”

The Laker does, however, apparently have some misgivings.

“Lamar is a little weary of exposing his baby on TV,” the source adds. “He already doesn’t like his life being played out for everyone to see eight months of the year.”

If he wanted privacy, he really didn’t marry into the right family! After all, one of the reasons for their rushed wedding was allegedly that they wanted to include the September 2009 affair in last season’s Keeping up with the Kardashians finale.

The reality show is also said to be the reason the Kardashian clan is staying quiet now. The theory is they want to save the big reveal for an upcoming episode.

It bares mention, however, that the baby report has her at only 2 months pregnant. No mom wants to share the news until they’ve made it through the first trimester.

Meanwhile, with the Lakers set to take on the Celtics for the NBA title, Odom is apparently thinking of asking his wife to skip the away games, whether or not she’s pregnant.

“It’s a little more hostile in Boston,” Odom told Yahoo! Sports. “I don’t know how my wife is going to be able to sit in the crowd. They gave it to my kids last time in Boston. I can’t repeat [what was said]. It will be fun. The people were rude to my kids, but it was fun.”

Lamar was referring to Destiny and Lamar Jr, his two children with ex, Liza Morales.

SheKnows wishes Lamar and Khloe luck with the pregnancy, just in case it’s true, and as always, we will stay on top of the story.