With another scandal hanging over her, Sarah Ferguson gave her first interview to Oprah Winfrey on Friday. It will air today, Tuesday, June 1. 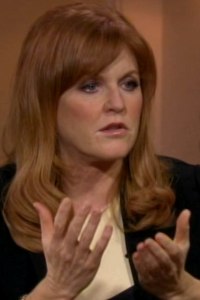 Most caught a glimpse of the now infamous video sting last week, or at least heard the news that the Duchess of York, Sarah Ferguson, 50, asked an undercover reporter for over $70,000 in exchange for access to her ex-husband, Prince Andrew.

“I can open any door you want,” she says in the tape, believing she’s offering her ex-husband up as a business connection.

The Duchess herself managed to avoid watching that tape all the way through, until Oprah showed it to her during the interview.

“I haven’t faced the devil in the face because I was in the gutter at that moment,” Ferguson told Oprah.

“I feel sorry for her,” Ferguson said after watching the tape. “She looks exhausted.”

The Duchess also acknowledged that she looks drunk in the video — and that’s because she was inebriated. “I’m aware of the fact that I’ve been drinking, you know, that I was not in my right place,” Ferguson said in the interview.

Ferguson also references having made the move to sell out her ex in order to help an unnamed friend. “A friend of mine needed $38,000 urgently,” Ferguson said on The Oprah Winfrey Show. “I was so out of control with desperation where I’d reached a point of no return.”

Prince Andrew, also known as the Duke of York, is father to Ferguson’s two daughters, Beatrice, 21, and Eugenie, 20. He’s the second son of Queen Elizabeth, fourth in line to the British throne and Britain’s special representative for international trade and investment.

Ferguson, who did a stint as a Weight Watchers spokeswoman, admits she’s been living beyond her means for some time, but also blames her lack of money on her attitude during their 1996 divorce settlement.

Ferguson begs forgiveness during her visit with Oprah, saying, “I have, through my actions, hurt millions of people, my friends and family foremost.”

Word is The Oprah Winfrey Show interview may be only 10 minutes long, but that the episode will take the full hour to look back at Ferguson’s current and previous scandals.

Read on for more Sarah Ferguson