Charlie Sheen is going to plead guilty in a Colorado court to assaulting his wife, Brooke Mueller, on Christmas Day, 2009. 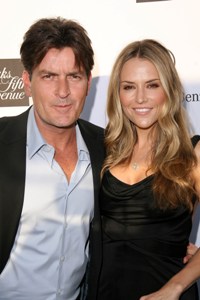 Charlie Sheen is prepping to plead guilty to a misdemeanor charge on June 7.

You may recall on Christmas Day he was arrested for assaulting Mueller and threatening her with a knife while they were vacationing in Aspen. Although Denise Richards appeared on Oprah a short time thereafter, she didn’t talk about the incident, but if we were to speculate, we can imagine Richards had similar issues with Sheen as well.

After Sheen pleads guilty, he will most likely immediately serve 30 days in jail. If he serves his time with good behavior, the time could dwindle to only 17 days — case closed! Sheen walks out a free man and the case is over.

The original Sheen court appearance wasn’t set until June 18 for a motions hearing which would have led up to the trial on July 21.

A new court date of June 7 was set up so the trial can be canceled courtesy of this plea deal.

Essentially, the 44-year-old Two and a Half Men star will enter the plea and in exchange for admitting his guilt, Sheen will have his menacing charge dropped. However, instead of being incarcerated immediately after the trial there is another option — probation. Sheen may be put on probation for two years.

Regardless of the outcome, it is clear based on his admittance of guilt, that Sheen has demonstrated appalling behavior.