Alicia Keys and her man, Swizz Beatz (real name Kasseem Dean), have acknowledged what we have been reporting for weeks — that she is expecting a baby and the two are engaged. 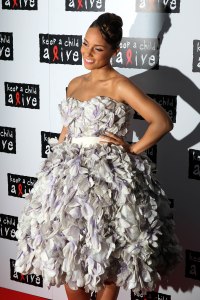 Swizz Beatz’s wife in turn, retaliated by suing the couple for destroying their family.

Even with the lawsuit over their heads, the couple can be joyous this holiday weekend for two reasons. Reps for Keys and Beatz released very little, but did report that the couple will get married “in a private ceremony later this year.”

This may be the first marriage and child for Keys, but Beatz was previously married to singer Mashonda and has one child, Kaseem Jr, with her and another son, Prince Nasir, from a previous relationship.

Mashonda finalized her divorce with Beatz two weeks ago and is suing her ex for past child support, reportedly in the amount of $334,000. Mashonda and Beatz were married in 2004 and split up in 2008 when Beatz allegedly started dating Keys.

To say Mashonda is upset is an understatement. Her opinion of Keys is quite clear. “I believe the two of them are meant for each other. Only a certain type of woman would sleep with a married man, and only a certain type of man would abandon his family for another woman. I guess they are equals.”

Beatz took to the press to say that his marriage had been on the slide for years and that his taking up with Keys had nothing to do with the dissolving of his marriage. Mashonda sees things differently. “I seriously hope people can learn a thing or two from all of this. It’s a disease to family growth and human behavior.”

Keys hit the red carpet May 27 in London for the Keep A Child Alive Black Ball showing off her baby bump, which left her reps no choice but to admit the pregnancy and also confirm the engagement rumors as true. Keep A Child Alive is Keys’ personal charity.

Beatz has served as Keys’ producer and worked with Jay-Z, Gwen Stefani, Jennifer Lopez and Beyonce.

Read on for more Alicia Keys