Pregnancy rumors have followed Mariah Carey since she married younger star Nick Cannon. Now, Carey has backed out of a project on doctor’s orders — could this mean Mariah Carey is pregnant? 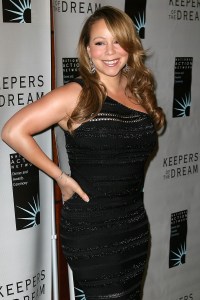 After Carey wowed everyone with her not-so-pretty performance in Precious last year, she landed a role in producer Tyler Perry’s next project.

With Perry’s adaptation of Ntozake Shange’s 1975 play For Colored Girls Who Have Considered Suicide When the Rainbow is Enuf set to start filming next month, however, Carey has suddenly backed out and her reason has lips wagging.

“She is not doing the movie because her doctor advised her not to,” Carey’s rep told UsMagazine.com. “More than that I cannot comment further.”

This talk of doctor’s advice has folks thinking that after all the false reports, she may finally, really be pregnant.

Carey, the 41-year-old superstar and her younger hubby, Nick Cannon, 29, just celebrated their second anniversary with a third walk down the aisle on April 30 and since tying the knot the first time, they’ve been quite open about wanting to have kids.

“We absolutely plan to have a family,” Cannon told MTV. “But we gotta prioritize, because that’s a major, major priority. That’s like the only priority in life, when you think about it: starting and raising a family. We wanna make sure everything is out of the way and that we don’t have any distractions.”

Over the last year, Carey and Cannon have been reportedly spotted leaving fertility clinics and some are saying her recent fuller figure is caused by fertility hormones. Of course, Carey’s weight has always yo-yoed and the pair issues baby bump denials about once a month, with the last one coming as recently as April.

It’s customary to keep baby news under wraps for the first three months, especially when the mom-to-be is 41. That’s not easy when you’re a big star and everyone is watching!

So, are Mariah and Nick due for another denial? Or will they have a due date for us, instead? SheKnows will let you know what we hear!