Kendra Exposed has gone on sale and its “star,” Kendra Wilkinson, immediately spoke out offering her opinions on how the sex tape has affected her life. 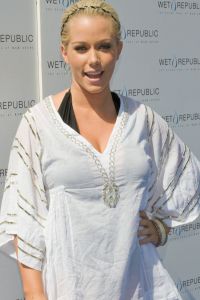 Wilkinson filmed a sex tape with her then-boyfriend at the age of 18 while still living in San Diego. She had yet to become one of the Girls Next Door or even meet Hugh Hefner.

Upon its release May 27, Kendra Exposed is well on its way to becoming the highest-selling celebrity sex tape ever. Considering she received a payout of $680,000 for the tape plus 50-percent of the sales, Wilkinson will not be financially hurting from the Kendra Exposed release.

What is hurting is the reaction of her husband, Philadelphia Eagles’ receiver Hank Baskett, as well as what it will do to her newborn son as he grows up.

Wilkinson is promoting the season finale of her E! show, Kendra, and in a newly released sneak peak from the show, she explains how she’s holding up and how life-after-sex-tape has been quite challenging.

Whether anyone presses play after buying the tape could be up for discussion, but by putting herself in front of the release and accepting money for its release, it’s hard to take her “this has ruined my life” chant seriously.

Wilkinson continued in the E! clip from her show’s May 31 finale by describing how the scandal has affected her husband, Baskett.

Read on for more Kendra Wilkinson