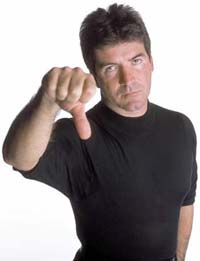 Stars came out in droves to give Simon a proper send-off. Bret Michaels risked life and limb to perform at the finale.

Dane Cook put together a musical number highlighting some of Cowell’s best put-downs (and was interrupted by a former American Idol contestant-Kanye West wannabe). Hall and Oats and Alanis Morisette came out to play with the contestants, and even Paula Abdul dropped in to say goodbye to her old friend.

The show, which saw the crowning of Lee DeWyze as the new American Idol despite runner-up Crystal Bowersox’s crowd popularity, pulled in 24.2 million viewers — a terrific number for any network show, but down over four million from last year’s finale numbers of 28.8 million!

Who will replace Simon in the judge’s chair?

Big names like Madonna are being thrown around, and even Bret Michaels himself volunteered for the gig. But American Idol insiders say as of right now they plan on no permanent replacement but will likely rotate guest judges in and out. Expect to see a new face every week on next season’s American Idol!

Missing Simon already? Don’t worry — he’ll be back on TV in the blink of an eye with his own new program X Factor, an American version of the popular British talent show.