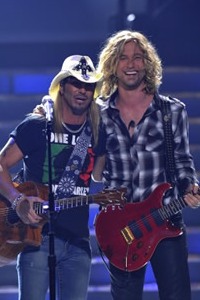 As the confetti is swept off the Nokia Theatre stage and DeWyze takes his victory lap, all people are talking about for American Idol “the day after” is who performed. From Hall and Oates and Janet Jackson to Christina Aguilera, Reality TV Magazine has all your performance videos!

Oh, and there’s also the surprising performances from “artists” not in the same league as Jackson and Aguilera, or even Bowersox and American Idol champion DeWyze — yes, we’re talking about William Hung and the Pants on the Ground guy!

One of the biggest shocks was seeing Bret Michaels perform Every Rose Has a Thorn with Casey James, merely days after suffering a warning stroke, weeks after a brain hemorrhage and days after winning his own reality competition, The Celebrity Apprentice. It could be argued that Michaels should be in bed resting, but considering he is beginning his summer tour without so much as a nap either speaks volumes about his commitment to music and his fans, or he is simply crazy for bucking his doctor’s advice to sit still.

So head on over to Reality TV Magazine and don’t miss a single video from last night’s big American Idol finale that not only saw DeWyze crowned the 2010 American Idol, but also served as Simon Cowell’s last night at the American Idol judging table.

Even Paula Abdul stopped by to wish Cowell well!

WATCH all of the performance videos from American Idol’s finale! >>