Bowersox began the season as the favorite. Midway through the American Idol season, Bowersox was still the odds-on pick to win it all. Even as the show concluded with the performances May 25, judges and much of the media had all but anointed Bowersox the next American Idol. 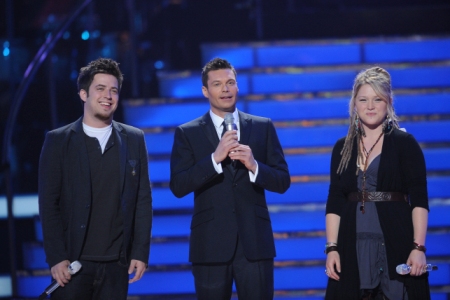 I’ll tell you what happened. The same thing that happened to Adam Lambert, happened to Crystal Bowersox. Lee DeWyze took the popular vote when it came down to a two-person race. In a two-person battle on American Idol, the teen heartthrob will always win. Always.
Of course, having just said always, there is one year I’m sure many of you are going to turn to as the exception — when David Archuleta lost to David Cook. Well, honestly, in the battle of the Davids, American Idol still selected a winner that was immensely popular with the teenage female fan base of the American Idol demographic.

Plus, Archuleta was just too cute, Cook was more hot and still is to this day.

Back to the American Idol May 26 finale and DeWyze’s big American Idol crowning. As oftentimes happens in entertainment, especially when it comes to reality TV competitions, the upset — upon closer reflection — is hardly an upset at all. When DeWyze accepted his title, he was joining an esteemed list of victors. But, what he has also become a part of is a dispute as old as the show itself, the “Who should have won American Idol debate.” Consider it begun!

Let us know: Who do you think should have won American Idol?